A Hindu priest and a Muslim social worker have come together to promote harmony during times of polarisation and communal discord. 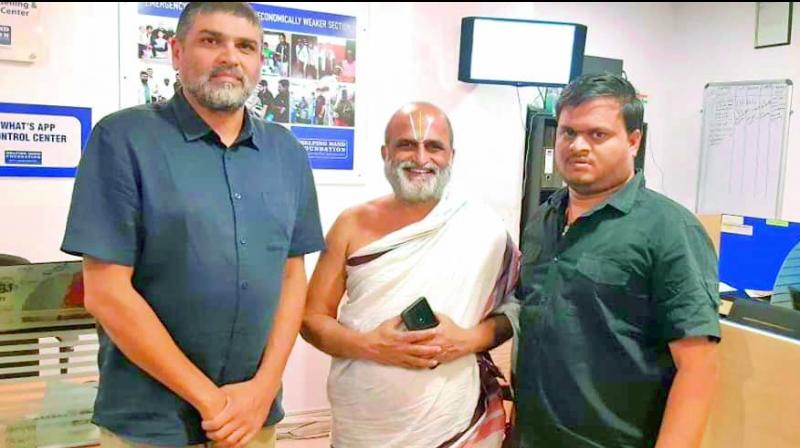 Despite differences in their faith, culture, attire and, as some would see, calling, a Hindu priest and a Muslim social worker have been making a statement in humanity as they work together to foster love and goodwill. The polarisation they witness around them appears to be of no consequence to the duo.

C.S. Rangarajan, chief priest at the Chilkur Balaji Temple in Hyderabad, and Mujtaba Hasan Askari, of Helping Hand Foundation (HHF), have been working ceaselessly to give communal harmony a chance. They’ve been doing their best in promoting shared values and upholding the doctrine of ‘unity in diversity’ through well thought-out programmes.

“Our aim is to ensure that human values are placed above religion and faith. Humanity is the biggest religion,” they say in unison.

The divine intervention
Both batch mates of the College of Engineering, Osmania University, Rangarajan and Askari quit their lucrative jobs at the peak of their career to bring about social change. While the former, a social reformer who wants to purge the society of caste-based prejudices, turned to spirituality and became the chief priest at the Chilkur Balaji Temple, the latter founded the NGO Helping Hand Foundation to serve humanity in his way.

Interestingly, what brought the duo together was a deaf Dalit woman named Kamalamma, who sells flowers at the Chilkur Temple. In 2018, she tied rakhi on Rangarajan’s wrist, but it would be much later that he learns about her handicap.

Rangarajan recounts how after he learnt of her deafness, with her rakhi on his wrist, he felt duty-bound to help the woman. He quickly took Kamalamma to the Gandhi Hospital in Hyderabad, where the ENT surgeon diagnosed her with profound hearing loss and recommended a hearing aid. The hearing aid, priced at `55,000, was expensive. The local newspaper reported the story, and as luck would have it, Askari read about it and got in touch with Rangarajan to let him know that his NGO would foot the bill. The hearing aid restored Kamalamma’s hearing.

Serving God through humanity
Instead of parting ways after that incident, the good Samaritans stayed in touch. They met regularly to exchange ideas on the positive work they could do for a society caught in the whirlpool of political turmoil and religious polarisation.

Then, sometime last year, Lucas — a Lallaguda-resident — approached Rangarajan, looking for support for his daughter’s education at the St Francis College, Begumpet. The priest immediately contacted Askari, who arranged the money from HHF. Here was a Muslim NGO reaching out to help a Christian girl on the recommendation of a Hindu priest.

Since then, the duo has been working closely to promote interfaith dialogue. Clearly, for the duo, humanity is an integral part of religion, while religion is a private thing. A few months ago, Rangarajan even visited the Masjid-e-Ishaq in the Old City, where HHF runs a primary healthcare centre. There, he addressed the community on the need for communal harmony. Rangarajan and Askari plan to promote communal harmony in a visible manner, through social work and dialogue. In fact, in the coming days, they intend to conduct health camps by Muslim doctors in some temples and by Hindu physicians in some mosques. The idea is simple-to make a difference through the work they do, and it's heartening to watch just that restoring peaceful co-existence, one kind act at a time.