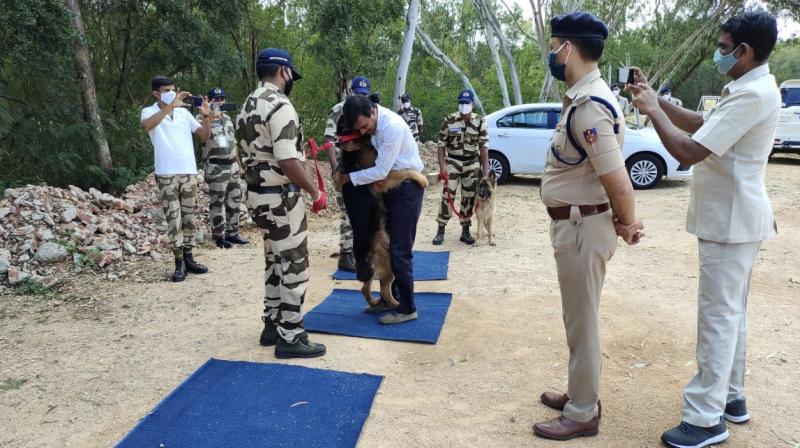 In September 2019, senior IPS officer C.V Anand gifted three German Shepherd puppies to the CISF security dog squad at the Rajiv Gandhi International Airport (RGIA). A year-and-a-half later, his happiness knew no bounds when the dogs — all grown up now — lovingly jumped on him and greeted him with joy.

“I went to the Hyderabad Airport to meet Sweetie, Roy and Max. It was wonderful to find that they recognised me immediately. They jumped on me with great affection,” Anand said.

The police officer had nurtured the pups for three months before giving them to the CISF. From brushing them to patiently cleaning them up, keeping a strict watch on their diets and monitoring them for cuts and wounds — he did it all, just as a caring parent would for his children.

The puppies were born to Hazel and Gordon — both German Shepherds – pets of Anand and his family, in May last year. Hazel was judged the best of breed in dog shows, and also stood third across all breeds in the International Hycan show.

A passionate animal lover, Anand, a 1991 batch IPS officer presently on deputation with the CISF, and posted as Director of the National Industrial Security Academy (NISA), has had dogs at his home ever since he joined the Indian Police Service. His love for German Shepherds began while he was working in Warangal district, where these dogs accompanied police personnel during search operations or when visiting a crime scene. He found the breed to be more intelligent, protective and work minded than many others. Anand gifted the pups to the CISF when he came to know that there were three vacancies in the dog squad at the airport.