AP CM Y.S. Jagan Mohan Reddy has announced that Visakhapatnam will be the new capital city of AP and many producers want to invest there. 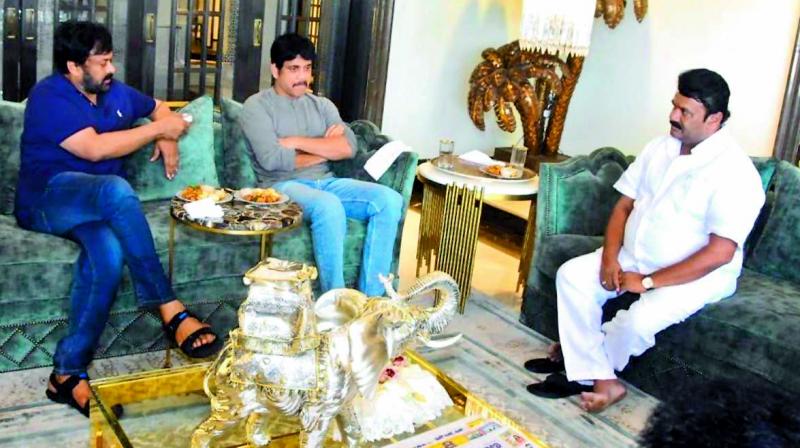 Ignoring the accepted practice of going through bodies like the Film Chamber of Commerce to discuss issues relating to the Telugu Film industry, the TRS Government has deputed Minister Talasani Srinivasa Yadav to do so. Talasani is talking with two actors — Chiranjeevi and Nagarjuna. Reportedly, no one else from the industry was invited, another departure from convention.

“Chiranjeevi is a big star and there is no doubt that if he request senior artists in the industry to come forward, they will respond immediately. But there are certain film bodies like the Telugu Film Chamber of Commerce, Telangana Film Chamber of Commerce, Producers Council, Film Development Corporation etc., and they should also have been involved for a meaningful discussion. Many in the industry are irked by this development,” says a source.

Andhra Pradesh Chief Minister Y.S. Jagan Mohan Reddy has announced that Visakhapatnam will be the new capital city of AP and many producers want to invest there. “Some of them want to build multiplexes, some want to start studios, and gradually, they want to take the industry to Andhra Pradesh. That’s why the Telangana Chief Minister K. Chandra Sekhar Rao asked Talasani to talk to the industry people immediately,” added the source. But the general feeling is that the Minister should speak not just with a couple of actors, but with all the senior artists in the industry. Some people in the industry have been criticising each other and some of the producers have started a new Guild, so the Minister wanted to be on the safe side. “That’s the reason he started his talks with these two actors,” says another source.