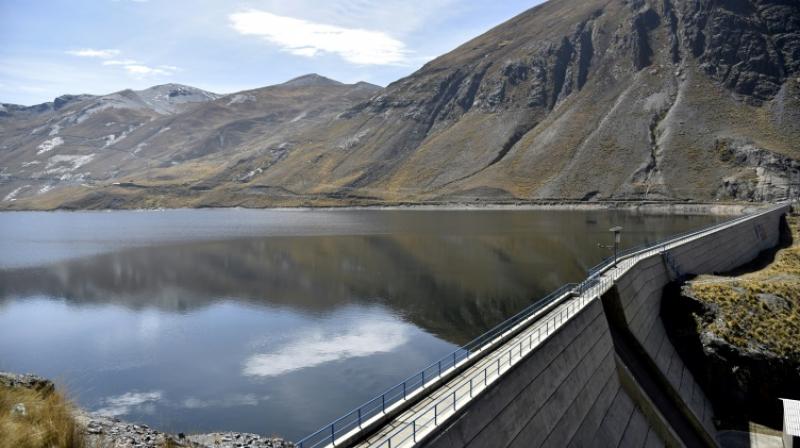 The Inkachaka dam looks full, but the snowcaps in the mountains around have disappeared. (Photo: AFP)

Water resources are running dry in the world's highest-elevation capital due to the combined effect of the Andean glaciers melting, drought and mismanagement. But instead of surrendering, the locals in Bolivia's capital La Paz are finding new ways to tackle the changing climate.

The sky-high metropolitan area's 2.7 million people have already been jolted by climate change: a severe drought that lasted for several months from 2016 into 2017 was Bolivia's worst in 25 years, leading to water rationing and widespread protests in several cities. In a sign of possibly worse to come, the Andean snowcaps which have been relied on to fill the city's reservoirs are disappearing at a rate that has alarmed scientists.

In a grey and misty Valle de las Flores district in the east of the city, people are beginning to adapt to disappearing water resources. There, Juana and her colleague Maria wash clothes for a living at a municipal wash-house, which is fed by spring water.

Public wash-houses, where the water is free, are becoming more popular, as residents change their habits around water use, getting their laundry done and escaping rising water charges. "It's true that there are more people coming here than ever before," since water started to become more scarce, said Juana, as the women scrubbed and wrung-out garments for a fee of 20 bolivianos, or around USD3 per dozen items.

In some neighbourhoods, locals have become accustomed to storing rainwater in cisterns, ready for when the dry season comes. The severe drought that lasted from November 2016 to February 2017 was blamed on the combined effects of the El Nino weather cycle, poor water management and climate change.

Leftist President Evo Morales declared a "state of national emergency" and tens of thousands of people in La Paz faced imposed water rationing for the first time, while surrounding mountains that were once covered in snow turned brown and barren. The measures were expanded to at least seven other cities, and in the countryside, farmers clashed with miners over the use of aquifers.

As part of a contingency plan, Morales doubled down by embarking on a vast investment program in a bid to ensure future water supplies. According to recent data from the national water company EPSAS, the government has spent USD64.7 million (58.7 million Euros) to construct four water reservoirs and supply systems from the lagoons of the surrounding Andean highlands.

The new systems will in part ease reliance on the Inkachaka, Ajunkota and Hampaturi dams that have until now supplied drinking water to around one-third of La Paz's population. The drought had left the dams almost completely depleted, resembling open-cast mines, and they took months to recover ample water levels.

Patricia Urquieta, an urban planning specialist at the University Mayor de San Andres, says that despite the hardships it brought, the drought did not lead to an increased collective awareness of the need to manage water resources. Once water restrictions were lifted "this awareness of the need to preserve water fizzled out," said Urquieta. "There has beeen no public policy to raise awareness about water usage, even though reports show that La Paz could end up without water because of the decrease of water in the moutains," she said.

UNESCO introduced an "Atlas on the retreat of Andean glaciers and the reduction of glacial waters" to map the effects of global warming in 2018. It said "global warming could cause the loss of 95 per cent of the current permafrost in Bolivia by 2050, and 99 per cent by 2099."

A recent study published in the scientific journal Nature, citing analysis of satellite images, reported that "the Andean glaciers are among those that shrink the fastest". Between 2000 and 2018, the glaciers lost an average of 23 billion tonnes of ice a year, according to Nature

"When the glaciers disappear, they will no longer be able to provide water during the dry season," said Sebastien Hardy, who is studying the local glaciers for the French Institute for Research and Development.

The Chacaltaya glacier, once the world’s highest ski resort, has already disappeared. Scientists said the glacier started to melt in the mid-1980s. By 2009, it had vanished. The Inkachaka dam, a few miles outside the La Paz, is currently more than half-full, fed by snowfalls during the austral winter. But the year-round snowcaps on nearby mountains, visible as recently as 30 years ago, no longer exist.