Welcome to the dark side

There's a new Joker movie round the corner, and people cannot contain their excitement. 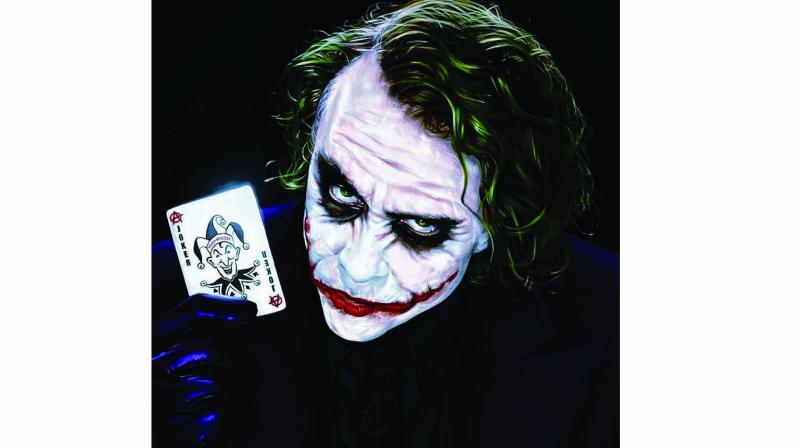 Superhero films and comic books have been a part of everyone’s childhood, imparting the learning that ‘good always trumps evil’.

Have you ever sat in a movie theatre and watched thousands of people root… for the bad guy? Odd, isn’t it? Except in superhero films, where characters like the Joker, Thanos and Bane wreck havoc with style, it isn’t difficult to imagine such a sight.

Superhero films and comic books have been a part of everyone’s childhood, imparting the learning that ‘good always trumps evil’. Things, however, have worked a bit differently. In 2008, Heath Ledger’s performance of the Joker in The Dark Knight left people awestruck. Even earlier, Jack Nicholson had done true justice to the character in 1989’s Batman. The caped hero, on the other hand, has never been as prolific a character. And, now, with Joaquin Phoenix as the Joker set to get his own film the next month, the hype is arguably even more than Nolan’s The Dark Knight Rises. And there’s barely any Batman in it either. So the real question is — why are people fascinated with people?

Kaustubh Sharma, a DC Comics fan, thinks that the Joker (especially the one played by Heath Ledger) wasn't just a character in a superhero movie but represented the evils of society that exist within us all. Sharma says, “Joker as a character is one of the most iconic villains to have existed, be-cause, the way he justifies his actions and motives is what entices me the most.”

Indeed, the plot showcases a mysterious character whose backstory is always a question mark — but one who is meant to show a mirror to society. Even with characters like Bane and Thanos, who have backstories, there is deep-rooted psychological reasoning for their behaviour that even has people sympathise with them. Perhaps, these flaws are what make them more human than superheroes, who are also flawed but idealistic representations of society

Shirshendu Bhattacharya, a Joker lover, echoes a similar sentiment when describing the character and says, “There is not a thing about him which you won’t get sympathetic towards and a point comes where you start thinking — yes, whatever he is doing is correct and society deserves it because it hasn’t done good things to him. So why should the Joker be good to society? And these days we all are under so much stress and pressure from society that we end up having anxiety or depression, just like the Joker.”

Also, today, the viewers are going beyond good and bad or black and white. They are interested in exploring the ‘grey’. Kaustabh continues, “They want to know what makes evil so evil. They are drawn to the dark pasts of characters who are not ‘good’ in the conventional sense. They want to dig deep into their psyche. Superhero movies today are more complex. While we still cheer on for the ‘Hero’, we can’t help but sympathise for the equally intelligent ‘Villain’."

Vivek Kumar, another avid film watcher, adds that it is the villain defines the hero and if the character is weak or not that powerful, then the whole fun of watching a movie is wasted. Vivek talks about his favourite hero and says, “I like Thanos because the whole Avengers series revolves around this mastermind villain who is just giving orders to fulfil his dream of bringing balance to the universe.”