An initiative saw notable personalities and comedians come together to instill a sense of shared responsibility for a better and sustainable future. 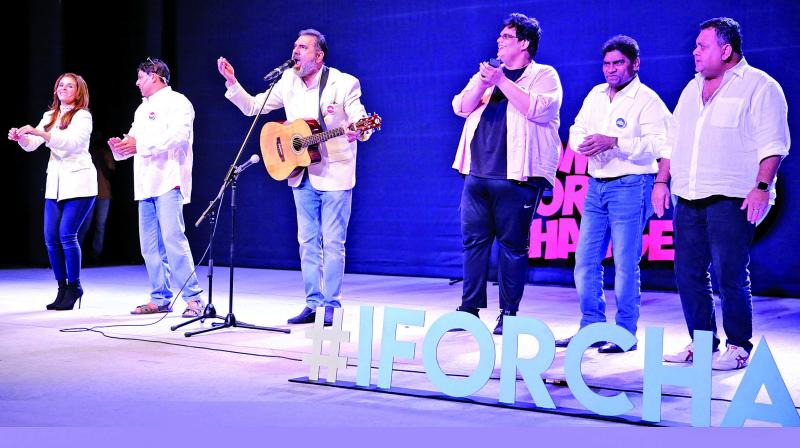 When you bring the best from the world of comedy to take the stage and talk about ‘sustainability’, should you expect anything less than a laugh riot? This is what happened when the likes of Johnny Lever, Boman Irani, Kunal Vijayakar, Cyrus Broacha, Supriya Pilgaonkar, and Abhish Mathew, to name a few, took the center stage at ‘Comics for Change’, encouraging youth to embrace UN Sustainable Development Goals.

With Nobel Peace laureate Kailash Satyarthi as the guest of honour, the event curated by Vijayakar and Broacha acted as a platform to use humour and help start a relevant social conversation amongst youth about sustainable responsibility. Ask Vijayakar how humour can play a role in addressing grave concerns such as education, poverty, and sanitation, he quips, “What else will they think with us in the picture, comedy only. You speak to people in the language they understand, and if it is comedy, then why not.” The comedian goes on to reveal that the initiative came out of the discussion to jointly commemorate World Human Rights Day and the anniversary of Kailash Sathyarthi’s Noble Peace Prize. “So we collaborated with Kailash Satyarthi Children’s Foundation, UN Women and got the comedian community and non-comics together to make the younger generation aware of sustainability issues,” he adds.

Firmly believing that the universal language of humour can help trickle down the most complex issues of society into a long-lasting impression, the event aims to create awareness and sensitise the future generation to embrace sustainability as a core of their social, political and business decisions. “We need to bring change in our country and in our youth. This initiative is a great way of using humour to inspire youth and I am happy to be a part of it,” says veteran comedian Johnny Lever who addressed the goal for responsible consumption.

While Urvashi Rautela and Supriya Pilgaonkar addressed fitness and wellbeing, Sorabh Pant and JD Majethia on climate change, Abish Mathew on innovation and infrastructure and Tanmay Bhat on quality education; Boman Irani’s closing act on poverty addressed the issue narrating the plight of urban poor. “There is something called the urban poor where people believe they are poor. The Urban poor feels that if they don’t have a nice car or are travelling in the economy class, then they are gareeb. But it is time for us to look at people who genuinely don’t have the opportunity because they are poor. That is the issue,” emphasises Irani.

However, the Mumbai Bhai MBBS actor in his trademark witty humour goes on to add that his wasn’t entirely a stand-up, but he sharing anecdotes to which people laughing was a bonus. “I was just talking, and sharing some stories. The content is substantive which is important and if it’s funny, it’s a perk. It can’t work the other way around. We are making fun of ourselves and to me, I am a south Bombay poor, which is even worse,” smiles Irani.

Quiz them on hurting sentiments in an already sensitive society while addressing social issues; the comedians believe that if the subject is important enough, then what is required will be done. “If we sit and try to please everybody, we will never get any work done. If the intention is noble, then satire and humour are good to get the message a cross,” adds the actor. Citing Munna Bhai as a good example, Irani explains how with the help of Mahatma Gandhi’s teachings, they were able to put across various messages.

“We are talking about people who don’t have choices. It is about how you look at poverty,” he adds.

For Vineet J. Mehra, UN Speaker & Founding Member of the Global Sustainability Network and founder of DOT (green mobility solutions provider), the beauty of sustainability is the meaning one chooses to give it.

“Sustainability is easy to transit and amplify through a platform like this. Humour is the most commonly understood language and transients to all generations, especially the youth. They will do the right thing when they see sustainability goals being implemented in front of them,” concludes Mehra.