The 21st edition of the performing arts festival promises an engaging line-up of plays and workshops. 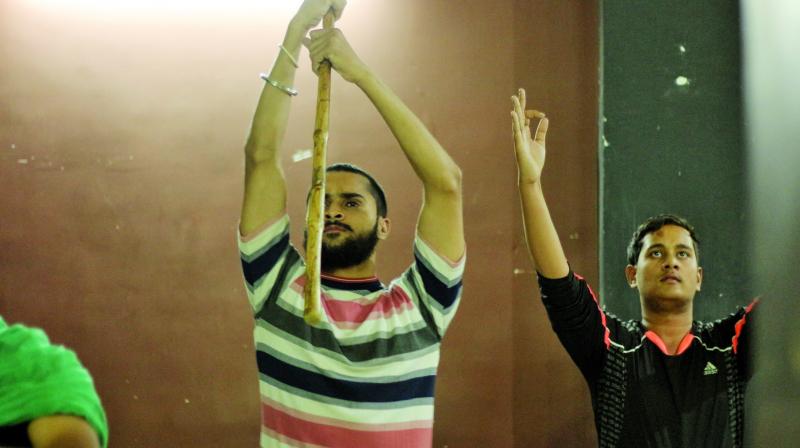 A still from the reharshals of Agni aur Barkha

The curators, a team of young theatre professionals under the age of 25, watched nearly 200 performances from across 27 cities in 15 languages churning out four full-length plays like Bain by Mumbai Theatre Arts, Sane Ani Company by Aajkal from Pune, Baksa by DOT Theatre from Bangalore, and Agni aur Barkha by Samagam Rangmandal from Jabalpur.

Thrilled with the mix, Thespo founder Quasar Padamsee says, “Baksa is a newly written non-verbal play. Then we have something like Agni aur Barkha, a well-written Girish Karnad play that may be influenced by mythology, but is about personal choices. It is fantastic to see how these young minds work. Then we have one shorter piece about Kashmir from Delhi.”

The DOT Theatre, making their way on the stage after two years of volunteering at Thespo, is portraying on stage the pointless human pursuits and confinements without using words. “The play talks about how the cycle of expectations from a person, to do one thing after another, never ends. We are told that if we achieve a certain thing then we are free, but it never happens and we keep going from one box to another,” says the director Amrith Jayan.

The play begins with an actor exploring the space (a box) after which another man is thrown into the same space. Their interactions eventually lead to a conflict, where only one person can leave the box and he can only do so by stepping over the other.

Elaborating on the nature of the play, Jayan dismisses it as a silent play and emphasises that it has a language created by actions. “It has no words but has a language of its own. While the two actors share no dialogue, their actions become the language. It is the manner of the play trying to communicate itself, and how two people are trying to explore things acts as its language,” explains the 19-year-old.

Meanwhile, performing Girish Karnad’s Agni aur Barkha is a group of five theatre enthusiasts from Jabalpur, acting and directing in unison. “We understood his content, his interpretation of mythology into modernism. The play starts on the mythological note, leading to modernism,” says Arpit Singh Bais, one of the directors. According to them, the play talking about drought, patricide, caste politics, and primal seduction, tries to convey the loss of humanity due to over-ambition.

With Thespo focusing on training young talent in order to fulfill their aim of building a global community of young theatre professionals, they are hosting an assortment of workshops on direction, sound design and lighting. The festival will also see a collaborative piece with Canadian theatre-maker Kathleen Duborg, who will also be holding an intermediate extensive workshop and play readings.

“Under our collaboration project, we provide young talent and develop a show. We have 12 young actors working with Kathleen on a 25-minute long play called For What Will Destroy You,” shares Padamsee. The play, drawing from the Roman myth of Phaethon delves into human frailty at the centre of environmental degradation.

Excited about working with the young talent, Duborg hopes that the ancient Roman origins can draw parallels to all cultures and ages, as it illuminates the present global climate. “I’m curious to see how the subject matter allows our rehearsal room to become rich with possibilities. The actors from Thespo are extremely thoughtful, and their personal stories have already laid the groundwork for our presentation. We have a lot of work to do in just five days and I’m looking very forward to it,” concludes the Canadian director.