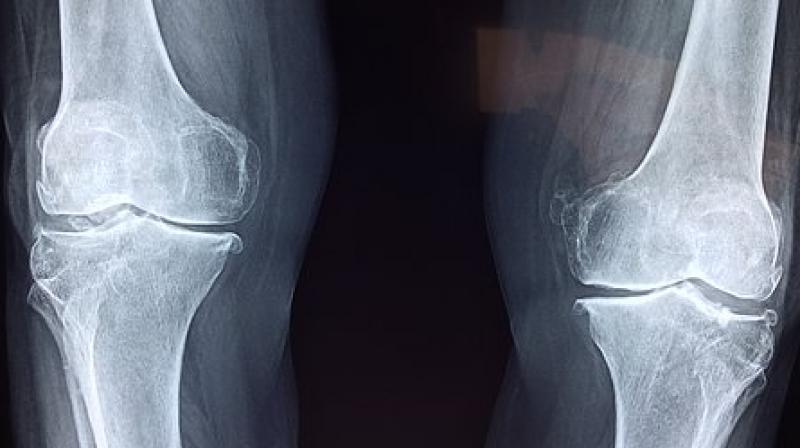 Though a relatively rare cancer in humans with fewer than 1,000 cases each year OS strikes more than 25,000 dogs annually. (Photo: Representational/Pixabay)

Washington: Researchers found that bone cancer known as osteosarcoma is genetically similar in dogs and human children. The findings could help in finding the treatment of this deadly disease, which hasn't seen a significant medical breakthrough in nearly three decades.

"While osteosarcoma (OS) is rare in children, it is all too common in many dog breeds, which makes it a prime candidate for the kind of comparative cancer biology studies that could enhance drug development for both children and our canine friends," said Will Hendricks, one of the study's senior authors.

Using multiple molecular-level testing platforms, researchers sequenced the genomes of 59 dogs, finding that canine OS shares many of the genomic features of human OS, including low mutation rates, structural complexity, altered cellular pathways, and unique genetic features of metastatic tumors that spread to other parts of the body, according to the study published in the journal of Communications Biology.

"These findings set the stage for understanding OS development in dogs and humans, and establish genomic contexts for future comparative analyses," said the study's other senior author, Cheryl A. The study also identified new features of the canine OS, including recurrent and potentially cancer-causing mutations in two genes, SETD2 and DMD. The study suggested that these findings merit further exploration.

OS is an aggressive disease and the most commonly diagnosed primary bone tumour in dogs and children. Though a relatively rare cancer in humans with fewer than 1,000 cases each year OS strikes more than 25,000 dogs annually.

Although surgery and chemotherapy can extend survival, about 30 per cent of pediatric OS patients die from metastatic tumours within 5 years. Cancer moves much faster in dogs, with more than 90 per cent succumbing to the metastatic disease within 2 years.

"The genetic similarity between dogs and humans provides a unique opportunity and a comparative model that will enable the development of new therapies within a compressed timeline," said Heather L. Gardner, the study's lead author.

Jeffrey Trent, a contributing author, said the comparative oncology approach is vital to the rapid development of new treatments for people and pets that need help today.

"Leveraging the similarities between the human and canine forms of OS adds greatly to our understanding of how this aggressive cancer develops and spreads. More importantly, it provides an opportunity to develop therapies that make a difference in the lives of children and pets," said Dr Trent.