‘My aim is to take chitravina around globe’ 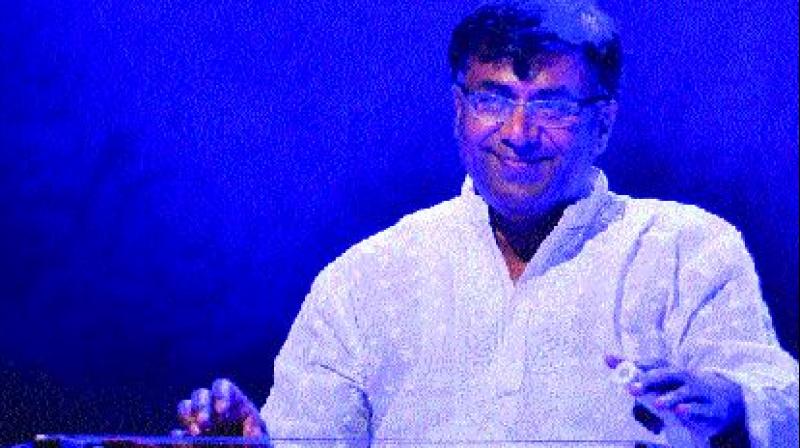 Ravi Kiran, an exponent of Chitravina, also known as gottuvadyam.

The face of the Chitravina (Gottuvadyam) today is Vidwan Ravi Kiran, whose family for the past two generations has been inextricably linked with the instrument. Indeed, the form the instrument is in today — with 21 strings — is a result of his grandfather's innovations.

But it is not only his accomplishments on the Chitravina, which are extraordinary; Ravi Kiran has also taken Carnatic and North Indian classical music to Western teaching institutions through his creation of a new system of music that he calls “mel-harmony”, combining Western techniques with Eastern note patterns.

Outspoken, highly articulate with strong beliefs, Ravi Kiran is a rare musician. Hailed as a child prodigy at the age of two, his music has been combined with scholarship and research in music throughout his life, resulting in early acclaim and awards — Tamil Nadu State award at age of 17, Sangeet Natak Akademi at the young age of 39 (today, the SNA Yuva award is given to artists who are less than 40 years!) and Sangita Kalanidhi in 2017.

He is indeed a “Karishma” (miracle) in music. It was illuminating getting his views on what he holds dearest; music.

Q. You have recently received the Sangita Kalanidhi award, the pinnacle for a Carnatic musician. What does this mean to you?
A. Coming from the Music Academy where I literally grew up, and I was projected first here, this award is very dear to me. As far as Carnatic music is concerned, The Madras Music Academy is like the Wimbledon of music. But I have always believed it's better to remembered for what you can give not what you have got. My father Narasimhan ji always used to say always look forward not at what you have achieved.

The value of any award is like currency — it changes. If an award is given to the wrong person, or too late, obviously its value will go down. The award committee needs to include experts, who have continuity, who know precedents, history of past awardees etc. Vidwan T.K. Murthy has accompanied seven generations of musicians; he was awarded a Padma Shri when he was 92 or 93 years old. He should have been given the Padma Vibhushan years back. Of course, awards are not the goal, they only spur you on in your journey.

Q. So what goals do you have now?
A. I would like to make the rare works of Venkata Kavi more known. He is a composer whose works have been forgotten and hidden for 200 years. Oottukkadu Venkata Kavi predated Tygaraja and was a contemporary of Bach. Whatever we do in music today, which we think are innovations, have already been done by him. (He quotes a passage in Sanskrit) — See the lyrics of this passage, there is poetry, mythology, a complicated 17 "matra tala", and of course the music. There is everything in it.

Ravi was an amazing, phenomenal composer — was amongst the early ones to translate and introduce Jaideva's work in the Carnatic world. He focused more on Radha, unlike in the South where usually Rukmini is lauded. He wrote full operas on Radha, Ramayana, Mahabharata, Bhagavata. He also wrote compositions on the works of Jaideva and Valmiki.

Also, my aim is to showcase our music in the West. I am lucky I have taken the Chitravina all over the world. It is not enough to simply talk about our tradition, which is a few thousand years old, while Western music is only 200 to 300 years old. When a respected Western music conductor praises our  music, as he has heard and analysed our music, it has a different impact.

“Mel harmony” has helped in this respect too. I would love to make a full 45-minute symphony based on Mel harmony, but I never set agendas for myself. Each of the things I do is a full time activity in itself. I cannot give my students as much time as I would like. Really, music in an ocean.

Q. Do you think your musical training is even now being added to?
A. Definitely. I have been influenced by my study of western music too. We all get the same information, how much we can connect the dots to absorb the information depends on individual to individual. Also your teacher matters — one teacher may be strong in melody, another in “laya”, or poetry  luckily my father was a very rounded man, he had everything, and he and I both had the time; he, to teach me fully, and me to absorb fully. He was not working when he taught me and I didn't go to school for my initial years, and only learnt from him. All my siblings are musicians too. V. Brinda from whom I learnt also had an amazing musical legacy - she was a musician's musician who was also linked musically with every great composer we have had. Just her 3-minute aalap would show the entire Ragam!

Q. What do you have to say on the current thought that there are fewer classical music listeners, so one has to make the presentation more palatable, lighten it somewhat?
A. You have to have strong convictions, and the will to carry through on your convictions. High quality authentic music will reach out to people no matter what the audience is, or how knowledgeable they are of our music.

Obviously you have to have the expressiveness in your music. Please see the top artists in the last generation — no one lightened their music, yet they were lauded universally, not just in in India. When you are asked to play somewhere, you are asked for what you are, what you represent musically, so you should not need to structure your recital to suit the tastes of your audience. The more popular you are, the more is your “responsibility” (response to your ability) to spread good listening values. Music is not only to entertain, but to elevate and to ennoble. I believe this is true of Western classical music too. Reviews of Western classical music concerts have talked about a concert not being good enough as it did not have enough melancholy, “Rasa”.

You should also have the vision to create your own alternate universe. It’s like when sage Vishwamitra was approached by a king to be allowed to go to heaven in his current body, he complied. But the king was kicked out of heaven and as he was falling, he appealed to Vishwamitra and reminded him of his promise. So Vishwamitra created an alternate heaven for the king, so that his promise would not be broken. I heard this story when I was five years old and I was influenced by it. I believe everyone should have the strength to create his alternate world.

Q. Tell us about the challenges you face as a stage artist?
A. For my Carnatic listeners definitely I have to play popular compositions as it's expected, but I always devote at least 25 per cent of my concert time to rare compositions, or something not usual.