Interestingly, the fibre-cloth statue has been made using digital sculpting technology, apparently a first for the country 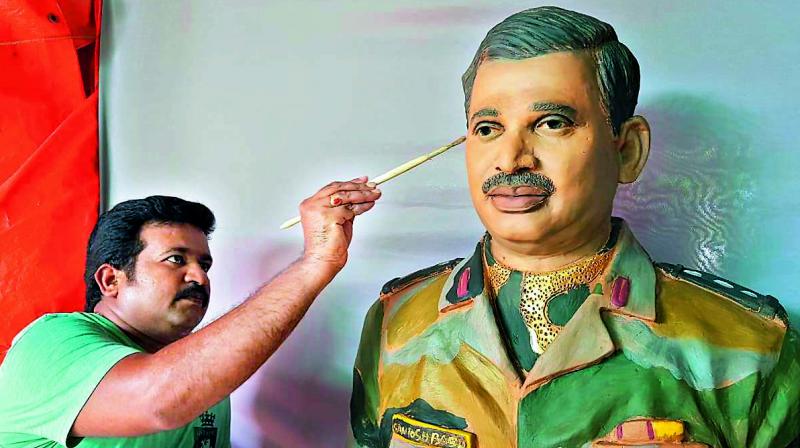 In a country thronging with statues of movie stars, politicians, and their henchmen, a few for those who died in the service of the country feels deserving, to say the least.

Now, a community in Suryapet Town in the Telangana State has decided to honour a brave-heart son of the soil, Colonel Bikkumalla Santosh Babu, who was martyred in the recent Galwan clashes against Chinese troops on June 15. Col. Santosh Babu was the commanding officer of the 16th battalion of the Bihar Regiment.

Comprising friends and admirers of the martyred soldier, the community has chosen to build a statue for the martyred Colonel in Suryapet, his hometown. Interestingly, the fibre-cloth statue has been made using digital sculpting technology, apparently a first for the country.

“We hope Col. Santosh Babu’s services will be remembered and will serve to inspire others to dedicate themselves to the country,” Ramakrishna explains.
Arun Prasad Vadayar, one of the Vadayar brothers, shares with us that they received the order for the statue around June 20, a job they took up on priority and completed in two weeks.

“Yes, the statue was for immediate delivery and we completed the task, as needed, as a mark of respect for Col. Santosh Babu,” he adds.

A first for India

The highlight of the two-and-half feet statue is that it was made using digital sculpting technology. Apparently, Vadayar brothers are the only sculptors in the country to use the technology. In making the fibre-cloth statue using digital sculpting technology, the Vadayar Brothers used a photo of Col. Santosh Babu to set the anatomy on a computer so they could prepare a mock-up model for him.

“We chalked out the first mould in Plaster-of-Paris (PoP), and then made a clay model and converted it into fibre cloth,” elaborates Arun Prasad. “Later, we mixed resin and papier-mâché and other ingredients in the desired ratio for the output.”

Digital sculpting technology is used for high-quality art and level of detailing; in other words, the technology ensures that sculptors can make a statue of someone with a precision of 0.01 microns meaning a high life-like resemblance which is as close and accurate as one can get with statues. The martyred colonel’s statue has been made in the Indian Army outfit.

While the fibre-cloth statue will be unveiled in Suryapet a month later, a bronze statue on behalf of the Telangana State Government will be installed at a junction in Suryapet.

Meanwhile, the martyred colonel’s brother-in-law Mukhteswar expressed his heartfelt thanks towards those who thought of keeping alive his brother’s memories. Describing the gesture a warm one, Mukhteswar shares with us that he is proud to welcome the initiative.

Talking of how the family has been receiving hundreds of letters from the people from various states hailing Santosh’s sacrifice while praying his family has the strength to carry through these difficult times, Mukhteshwar adds, “We hope Santosh continues to inspire youth and instil patriotism among people.