He advises students to lead a balanced lifestyle. 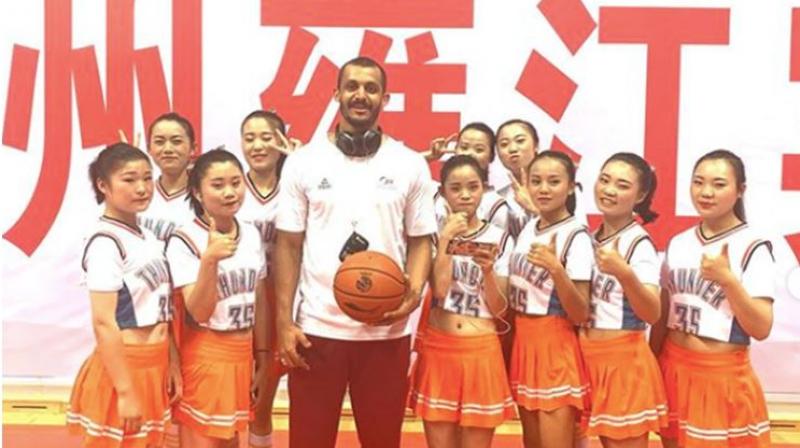 Mohamed Hassan A Mohamed, also known as Mizo Amin, is the 28-year-old professional basketball player and CEO of Punchy Store Co. Recently, Mizo Amin announced his plans to negotiate a new contract for the upcoming season with his team manager.

Mizo Amin is the current team captain of Al-Rayyan Sports Club and Qatar National Team in the Qatari Basketball League. Mizo is considered one of the top five three-point shooters in Asia. Mizo has been playing basketball since the age of five and started his professional playing career in 2009. Mizo has always been passionate about basketball and his talent was recognized by his father and coach Hassan Abdelmoaty Amin who put him on the right track.

Many students around the world often work to provide for themselves as they study. Whether part-time or full-time jobs before or after classes, or even freelancing from home while studying. On this topic, Mohamed Hassan A. Mohamed, also known as Mizo Amin, gave a seminar at Aspire Venue in Doha where he said, “I was once a student too, and I was working and travelling around the world as part of my career, but I was always able to balance between work, education, and life in general.”

“It is surely a tough choice for any student,” Amin added. “But if you learn how to manage your time, your life will become a little less stressful.” With that, Amin shared his personal calendar on the projected screen, and asked students to come out with the best program for his hectic schedule.

Guaranteed, it was a hard task. There were many huffs and puffs amongst the students. When the time given was up, Amin quickly scanned the program plans handed to him. There were 2-3 impressive plans, but the rest were all over the place. Some students suggested that he would attend lectures from 9:00am till 12:00pm, and board a plan to Turkey at 12:30pm, not keeping in mind the time Amin will need for transportation to the airport, and passport checking and baggage loading once he gets there.

Amin shared his adjustable, and very flexible plan on the next slide, and the students were surprised to see that he will attend only 20 minutes of the lecture, and leave campus by 9:25am, keeping in mind the 5 minutes walk to his car. Students were murmuring between themselves, before he interrupted their silent objections. “It is okay to leave class early, as long as you know that your performance is good in that subject and you won’t fall behind if you missed a lecture or two. Also, keep a good relationship with your professors, and I’m sure they won’t mind to help you out during their office hours,” said Amin.

It is very important for students not to neglect their physical and mental health, even during times where they feel absolutely exhausted. Amin started this sector by expressing how he dislikes the term ‘catching up on sleep’ as it is abnormal. “You shouldn’t be catching up because you should be sleeping your full 8 hours daily, otherwise, it is going to affect your performance in anything you do,” he said.

Amin further expressed his sadness over students who do not exercise at all. “Exercise is very important for your body and soul,” he said. He pointed out that, “not only for fitness purposes, but also you get to take your mind off the daily troubles in your life, and spend time with yourself.”

Amin joked about going early to bed, before he told students that while it is important to sleep early, it almost never happens due to his busy schedule, however, he makes sure not to deprive himself of his 8 hours of sleep and 1-2 hours or more of daily exercise, depending on your stamina.

Journey of a Young Genius

Giving tech to wheels: How Trucknetic is transforming the logistics sector