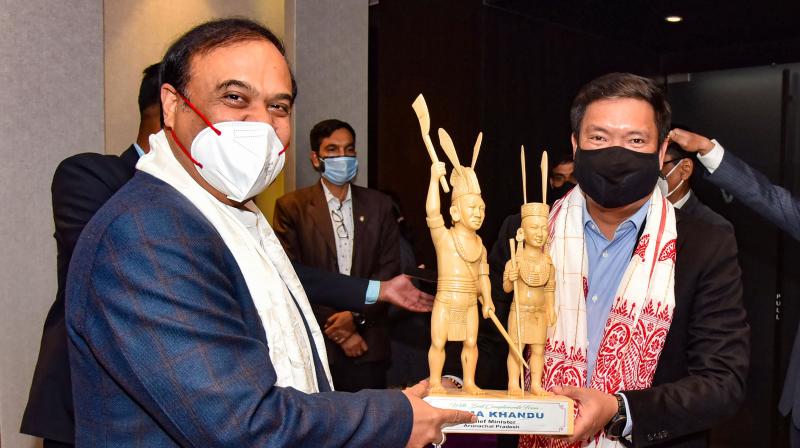 Guwahati: A day after the chief ministers of Assam and Arunachal Pradesh met to find a solution to the decades-old inter-state border dispute, tensions once again cropped up along the disputed area amid allegations and counter-allegations of police action and firing by locals from the Arunachal Pradesh side on Wednesday night.

The problem started over the ongoing Likabali-Durpai PMGSY road project in Arunachal Pradesh’s Lower Siang district. Assam claims that some parts of the road, under construction since 2019, falls under its Dhemaji district. The Assam police on Tuesday allegedly entered the territory of Arunachal Pradesh in Kangku circle of Lower Siang district and stopped the construction of the ongoing road project.

On Wednesday evening, a culvert under construction close to Hime village in Lower Siang was also burnt by “unidentified miscreants from the Assam side”, the authorities said.

In what was alleged to be retaliatory action, there were reports of “firing in the air” by locals from the Arunachal Pradesh side Wednesday night.

District officials from both Dhemaji (in Assam) and Arunachal Pradesh’s Lower Siang -- the two districts share a 150 km border -- reached the spot Thursday morning, and said the incident was “minor” and that the “situation was under control”.

The tension prevailed in the area after an Assam police team stopped the construction of the road at Hime. “The Likabali-Durpai road touches the disputed territory at some points on the border. On Tuesday, our team stopped one such construction. Since this is a disputed area, we have prevented construction on previous occasions too,” said Ranjan Bhuyan, Dhemaji’s superintendent of police.

It is significant that Arunachal Pradesh, which was earlier a part of Assam, shares a boundary of over 800 km with the state. The inter-state border region has witnessed frequent flareups. Clashes were first reported in 1992, and since then there have been several accusations of illegal encroachment from both sides. The dispute is now before the Supreme Court.

In August 2021, Assam chief minister Himanta Biswa Sarma told the state Assembly that there were at least 1,200 areas of dispute along the border with Arunachal Pradesh and that the two states were working toward solving it.

After Monday’s meeting with Arunachal CM Pema Khandu, Mr Sarma tweeted: “Solving boundary issues with neighbours is our priority. Discussed with Hon’ble CM of Arunachal Pradesh @PemaKhanduBJP, who came all the way to Guwahati, measures for a permanent solution to the long-pending issue. We decided to conduct a ground-level  survey on boundary status.” Mr Khandu also reiterated that they have been working to find a mutually acceptable solution to this problem.