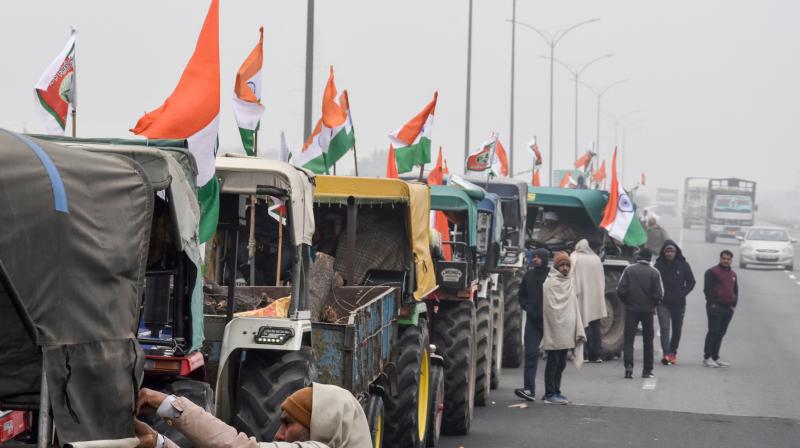 Police said that the rally will be conducted in three parts -- first from Singhu border will have a 62 km-long route, then from Tikri border with around 60 km route and Ghazipur Border with 46 km route. (Photo:PTI)

NEW DELHI: After several rounds of talks between Delhi Police and the farmers’ unions, the police on Sunday allowed their proposed “tractor rally” inside the national capital on January 26. "Protesting farmers can enter Delhi but can't disturb the Republic Day parade," the Delhi Police said Sunday evening, declaring that the tractor rally will begin amid tight security after the Republic Day parade on Rajpath, which terminates at the iconic Red Fort close to noon.

“Barricades and other security arrangements will be removed and the farmers will enter the national capital. Later, they will return to their destinations after covering a respectable distance,” a senior police official said.

Police said that the rally will be conducted in three parts -- first from Singhu border will have a 62 km-long route, then from Tikri border with around 60 km route and Ghazipur Border with 46 km route. “There are approximately 12,000 to 13,000 tractors at various borders -- around 7,000 to 8,000 at Tikri, around 5,000 at Singhu and around 1,000 at Ghazipur border which is expected to go up in coming days,” said police.

Police also said that there are intelligence inputs suggesting that there are elements, which pose a threat to the proposed rally and may disrupt it. “After analysis of Twitter handles it was revealed that there are 308 such accounts created in Pakistan which are attempting to create confusion and thus disturbances during farmers’ rally,” police said.

According to sources, the Delhi Police’s cyber teams are keeping a vigil on social media to track miscreants who may try to create panic.

Delhi Police Commissioner S.N. Shrivastva issued a circular and directed all officers and men, as well as Central Armed Police Force (CAPF) and other forces to be deployed for Republic Day Parade security to remain in a ready position to move at short notice for law and order arrangement.

Giving details about the parade, Deependra Pathak, special commissioner of police (intelligence), said, “The rally will start from Singhu border and pass through Sanjay Gandhi Transport Nagar, Kanjhawala, Bawana, Auchandi Border, Kundli-Manesar-Palwal expressway and will return to Singhu border. It will cover around 62 kilometres stretch. Police teams have done the assessment of these routes.”

“From Tikri border, the farmers have been given the route which will pass through Nangloi, Najafgarh, Jharoda, Kundli–Manesar–Palwal expressway and then will head back to Tikri border. They will cover a distance of around 63 kilometres,” he added.

“The farmers tractor rally from Ghazipur border will pass through Apsara Border, Hapur Road Kundli-Manesar-Palwal expressway and conclude at Ghazipur. Those farmers' groups will cover 46 kilometres,” the special CP said.

“For the Delhi Police, it will be a challenging task. We have spoken to Haryana and Uttar Pradesh police officers about how it will be conducted in a convenient way… We have also told farmers that the expected number of tractors should be distributed in a way that the rally is concluded in a peaceful and disciplined way. Adequate security will be provided to the rally by the police,” a police official said.

Police said that the farmers union ‘Sanyukt Kisan Morcha’ had assured them that they will go back to their respective places from where the rally starts.

While police tried to convince farmers’ leaders to hold their tractor parade outside the national capital, they were adamant on holding the proposed rally on Delhi’s Outer Ring Road.

Earlier three rounds of meetings were held between the unions and police officers from Delhi, Haryana and Uttar Pradesh, but it was during the fourth round of talks over the tractor parade on Friday where both sides reached an agreement.