Did not expect this result: Kharge on party's huge LS poll loss

Kharge lost from Gulbarga parliamentary constituency in Karnataka by a margin of 95452 votes against BJP's Dr Umesh G Jadhav. 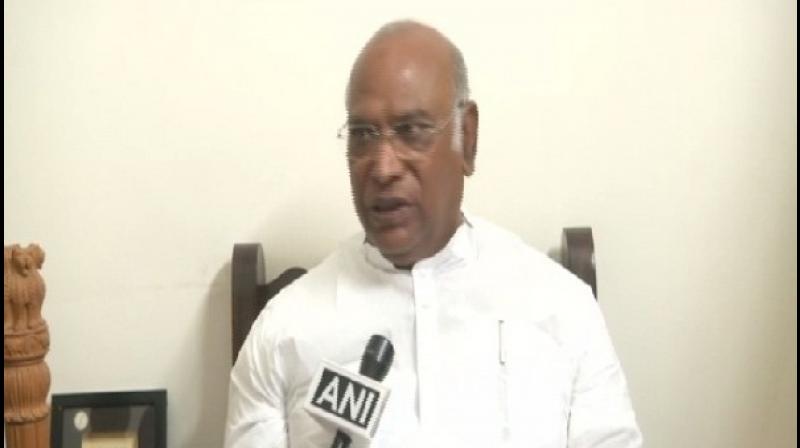 ‘There remains an element of doubt on EMMs. Not only Congress party but other opposition parties are also raising doubts on EVM,’ senior Congress leader Mallikarjun Kharge also said. (Photo: ANI)

Kalaburgi: Reflecting on the disappointing loss of his party in the Lok Sabha election, senior Congress leader Mallikarjun Kharge on Friday said that the results were not expected and cast an element of doubt on the functioning of EVMs.

Talking to ANI, Kharge said, "Lok Sabha results were not as per our expectations. There remains an element of doubt on EMMs. Not only Congress party but other opposition parties are also raising doubts on EVM."

"However, we accept our defeat and the discussion on the issue of EVM will be held later in a meeting of the Congress Working Committee in Delhi on Saturday from 11 am onwards when Congress leaders from different states across the country will be present," Kharge added.

On being asked about the situation in Karnataka, Kharge said results in parliamentary elections and assembly polls show different trends.

Kharge said, "We have won recently in Rajasthan, Madhya Pradesh and Chhattisgarh assembly polls, but in the parliamentary elections the results were different, unfortunately."

Kharge lost from Gulbarga parliamentary constituency in Karnataka by a margin of 95452 votes against BJP's Dr Umesh G Jadhav.