Akhilesh also says machines ‘malfunctioning or voting for the BJP’ across nation. 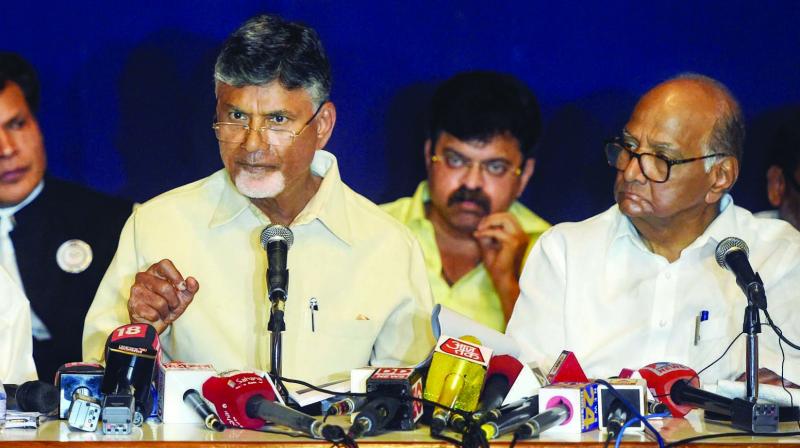 Mumbai: People are in a mood to change the Modi-led government but manipulation of EVMs is the “only worrying factor”, NCP chief Sharad Pawar said here Tuesday.

He was speaking at a joint media interaction addressed by leaders of the Congress, NCP, TDP, Trinamul Congress, AAP CPI(M), CPI and DMK.

Meanwhile, Samajwadi Party president Akhilesh Yadav Tuesday alleged that EVMs were “malfunctioning or voting for the

BJP” across the country and termed it a “criminal negligence”.

“EVMs across India malfunctioning or voting for the BJP. DMs say poll officials untrained to operate EVMs. 350+ being replaced. This is criminal negligence for a polling exercise that costs ` 50,000 crs. “Should we believe DMs @ECISVEEP, or is something far more sinister afoot?” Yadav said in a tweet tagging the Election Commission. Talking to reporters after casting his vote in Saifai (Etawah),Mr

Yadav said the EC should take cognisance of reports of malfunctioning of EVMs in Rampur and Badaun also.

“I have been to several constituencies. The people are in a mood to change (the government), they want a change both at the Centre and in the state. There is no question (about it),” Mr Pawar said.

“Our only worry is someone misusing this technology to manipulate elections... Our worry is manipulation through these machines,” he said.

“EVMs are vulnerable to programming errors,” TDP leader N. Chandrababu Naidu said, adding that the BJP can get votes only through manipulation.

EVMs can be manipulated, hacked and even malfunction, he said. Only 18 countries have so far adopted EVMs, he added.

Mr Naidu said the economy, business and agriculture are in a bad shape under Narendra Modi.

The chief minister said instances of EVM “malfunctioning and selective manipulation” of the machines were reported in the first three phases of polling in his state, Kerala, Goa and Uttar Pradesh. Mr Naidu said the Opposition would approach the Supreme Court on the issue again and sought counter checking of at least 50 per cent of the VVPAT slips to ensure transparency in counting of votes.