the PM’s address was shown by the party on television screens in all 78,000 election booth areas 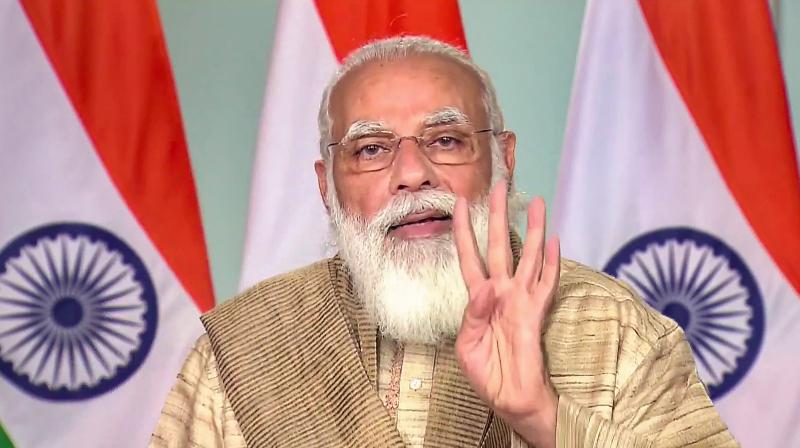 Kolkata/New Delhi: Prime Minister Narendra Modi on Thursday called upon the people to “respect daughters like Goddess Durga” and urged all citizens to “stand by” women. His message comes after the rising cases of violence against women, including rape. This was the first time that Prime Minister Modi had inaugurated a Durga Puja in West Bengal.

Speaking after “virtually” inaugurating a Durga Puja organised by the BJP at the Eastern Zonal Cultural centre at Kolkata’s Salt Lake area on Mahashasthi, on Monday morning, Modi said: “In Bengal, Durga is welcomed and treated as a daughter. This philosophy is the basis of our spiritual consciousness. That is why we are taught to respect all daughters like Ma Durga. On the occasion of Navratri, she is worshipped. And Durga Puja is about worshipping women’s power.”

With Assembly elections in West Bengal just over five months away, the PM’s address was shown by the party on television screens in all 78,000 election booth areas across the state.

Modi added: “Women’s power always has the ability to beat evil. It is the responsibility of all to stand by it in an organised way. This is also the BJP’s culture and determination. The government is alert about the security of women. Punishment for rape has been made a lot stricter. There is also a provision for the death penalty for offenders.”

In his address, the PM at several points tried to speak in Bengali, with a Hindi accent, apparently to compete with the ruling Trinamul Congress’ recent Bengali sub-regionalist campaign. Talking of his close connection with the state, he said he was feeling he was in the state, but apologised for his mistakes in Bengali pronunciation.

“The Bengali language has so much sweetness, but I know some gaps remain in (my) pronunciation. Still, I could not resist myself from speaking in Bengali out of love. With apologies for errors, I bow down to Ma Durga on this auspicious occasion for the welfare of the nation,” the PM added.

With an eye towards the BJP’s success in next year’s Assembly election, Modi also eulogised the state’s rich cultural heritage and legends for their excellence in the fields of religion, education, literature, social reforms, politics and the freedom struggle.

He added: “The BJP government has adopted a Look East policy. West Bengal has an important role to play in this mission. I firmly believe that Bengal will head towards a new direction as the pivot of this mission.”

Modi began his address by paying tribute to Rabindranath Tagore, Ishwar Chandra Vidyasagar, Netaji Subhas Chandra Bose, Rani Rashmoni, among many other icons of Bengal. “Whenever the need was felt in India's history, Bengal has always led the way for India and showed the path. Listing several well-known personalities, he said: “If I continue to take the names of such Bengalis, the day will end but we won’t run out of names.”

The Prime Minister also warned everyone to take precautions against the coronavirus pandemic, with several videos showing West Bengal crowds throwing caution to the winds. “I urge everyone to ensure distancing and wear masks during the celebrations at all times,” he said.