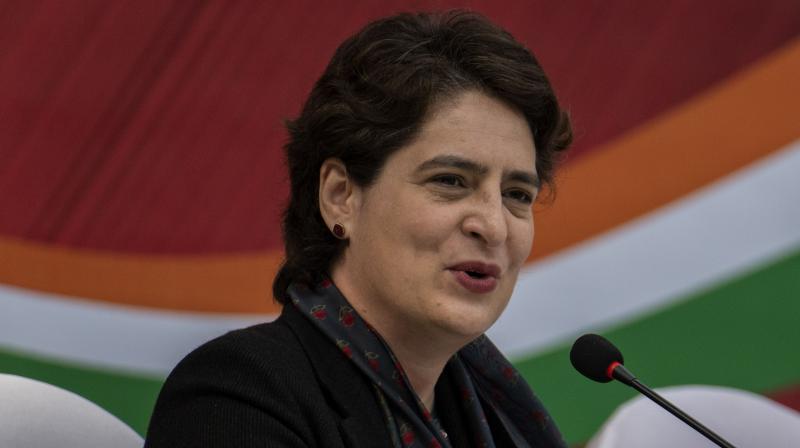 New Delhi: Congress general secretary Priyanka Gandhi Vadra on Saturday backtracked from declaring herself as the chief ministerial face in the upcoming Uttar Pradesh elections. On Friday, while releasing the youth manifesto of the party in the national capital, she was asked about the CM face. She had replied, “Are you seeing any other face from the Congress? Then?” She had further added, “My face can be seen everywhere.”

Speaking to a news agency on Saturday, she clarified that on Friday, she had made the comment about her being the chief ministerial face in “irritation”. She said, “I am not saying that I am the (CM) face (of Congress in the Uttar Pradesh elections)... I said that (you can see my face everywhere) in irritation because you all were asking the same question again & again.”

This U-turn within a day by the Congress general secretary has left the party cadres in the state confused regarding the position of the party. Her remark was considered as a major indication on Congress’ chief ministerial candidate for the Assembly elections scheduled in February and March. Congress till now has not projected a chief ministerial candidate in any of the five poll-bound states.

The Congress under Ms Priyanka Vadra’s leadership is trying to put up a strong fight in Uttar Pradesh by reaching out to the women and youth that form a significant part of the state’s population.  In the 2019 Lok Sabha elections, there were reports that she might contest from Varanasi against Prime Minister Narendra Modi but the speculations later fizzled out. She was then appointed general secretary incharge of Uttar Pradesh East in 2019. Later, she was given responsibility of the full state. In the last couple of months, she has been re-building the organisational structure in the state.

Congress is facing an uphill task in the state; several of its leaders have deserted the party claiming that it has no future in the state. Recently, Supriya Aron, who was given a ticket by the Congress from Bareilly, joined the Samajwadi Party. Her husband Praveen Aron, former Lok Sabha MP of the party from Bareilly, also joined the Samajwadi Party on Saturday. Others, who have deserted the party, include West UP leader Imran Masood, Harendra Malik and his son Pankaj Malik. UP stalwart and former union minister Jitin Prasada quit the party last year.