Priyanka is second Indira Gandhi, we will win next polls: UP Congress chief

He also claimed that the Yogi Adityanath government in UP 'fears' both Priyanka Gandhi and Rahul Gandhi. 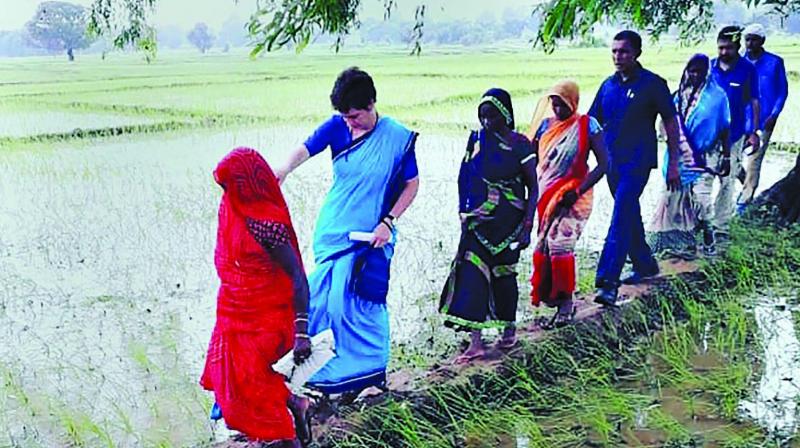 Describing Priyanka Gandhi Vadra as the "second Indira Gandhi" and a "storm of change," UP Congress chief Ajay Kumar Lallu on Sunday exuded confidence that the party will emerge victorious under her leadership in the 2022 state assembly polls. (Photo: File)

Lucknow: Describing Priyanka Gandhi Vadra as the "second Indira Gandhi" and a "storm of change," UP Congress chief Ajay Kumar Lallu on Sunday exuded confidence that the party will emerge victorious under her leadership in the 2022 state assembly polls.

He also claimed that the Yogi Adityanath government in UP "fears" both Priyanka Gandhi and Rahul Gandhi. "Priyanka Gandhi is the second Indira Gandhi. She is the storm of change (badlaav ki yeh aandhi, jiskaa naam Priyanka Gandhi hai). Under her leadership, the Congress will emerge victorious in the 2022 UP Assembly elections," he said.

"This BJP government (headed by Yogi Adityanath) fears both Priyanka Gandhi and Rahul Gandhi, as it knows that if the brother-sister hit the streets, it will start sweating," the state Congress chief said.

Asked whether he will be the CM face of the party in the 2022 polls, he said, "No. I am only a party worker, and my 'dharma' is to work for the party's ideology. Congress has a glorious history of participating in various struggles. And on the basis of these struggles, history has been changed."

On Samajwadi Party and its president Akhilesh Yadav, the UP Congress chief said, "The people of the state had given a mandate to the Samajwadi Party as the principal opposition party in the state. But, it has failed on that front."

He also said that the Congress adheres to the ideology of Mahatma Gandhi, and serves the country by embarking on the path of truth and non-violence. "On the contrary, the BJP's style of working and policies are divisive," he charged.

A two-time MLA from Tamkuhi Raj constituency, Lallu is considered close to Priyanka Gandhi Vadra who is the party's general secretary (incharge, Uttar Pradesh East). Prior to becoming the UP Congress chief, he was the Congress Legislature Party leader in Uttar Pradesh Legislative Assembly.