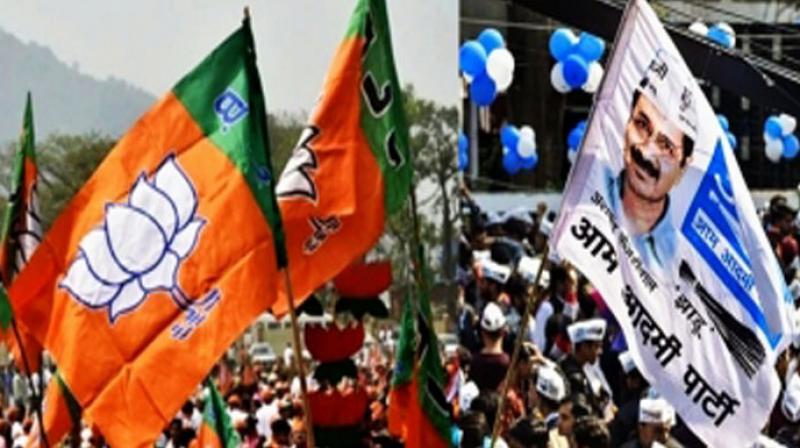 The raids conducted by the CBI at the residence of Delhi deputy chief minister Manish Sisodia and other location have triggered a war of words of between the AAP and the BJP. (Image credit: Twitter)

New Delhi: The raids conducted by the Central Bureau of Investigation (CBI) at the residence of Delhi deputy chief minister Manish Sisodia and other location have triggered a war of words of between the AAP and the BJP. Delhi chief minister and AAP leader Arvind Kejriwal said that the raid at his junior colleague's house was the result of their good performance which is being appreciated globally.

AAP MP Raghav Chadha said the raids were conducted by 'BJP's CBI'. He lauded the Delhi government led education revolution in the region and said that there were many such raids in the last eight years that resulted in nothing.

Meanwhile, Information and Broadcasting Minister Anurag Thakur dubbed Manish Sisodia as an excuse minister after the latter claimed he was paying the price for honesty as the CBI searched his premises in connection with the excise scam.

The minister said the fear of a CBI probe had compelled Delhi Chief Minister Arvind Kejriwal and Sisodia to link the searches by the central investigative agency to education facilities in the national capital.

The fear of probe compels Arvind Kejriwal to speak about education. This is not about education, but about the excise policy. Don't think of people as fools and stop your addresses to the nation, Thakur said.

The minister hoped that Sisodia would not claim to be suffering from memory loss as his ministerial colleague Satyendra Jain, who has been arrested in connection with a money laundering case.

People seek answers. The corruption in excise policy has revealed the true face of Arvind Kejriwal and Manish Sisodia.They talked about fighting corruption and not entering politics. Not only did they venture into politics, but are also now involved in corruption, the senior BJP leader said.

Meanwhile, responding to the raids, Manish Sisodia said that conspiracies will not break him or deter his resolve to continue to work for good education.

The CBI has arrived and is welcome, Sisodia said on Twitter. Besides the home of the Aam Aadmi Party leader, the probe agency also searched the residence of IAS officer Arava Gopi Krishna and 19 other locations after registering an FIR in connection with the Delhi Excise Policy 2021-22.

"We are hard core honest and are shaping the future of lakhs of children. It is very unfortunate that those who do good work in our country are harassed like this. That is why our country could not become the number one," Sisodia said.

In a series of posts on Twitter, he said they will extend full cooperation in the probe so the truth emerges soon.

"Till now, there have been many cases against me but nothing came out. Nothing will come out in this also. My work for good education in this country cannot be stopped," he asserted.

Sisodia alleged that people were troubled by the excellent work being done in Delhi in the sectors of education and health. That's why, he said, Delhi's education and health ministers had been caught  a reference to himself and Satyendar Jain who is behind bars.

"There are false allegations against us and the truth will emerge in court," he added.

"I won''t be broken by your conspiracies. I have made these schools for lakhs of children of Delhi. The smiles we brought in the lives of lakhs of children is my strength. Your intention is to break me," Sisodia said.