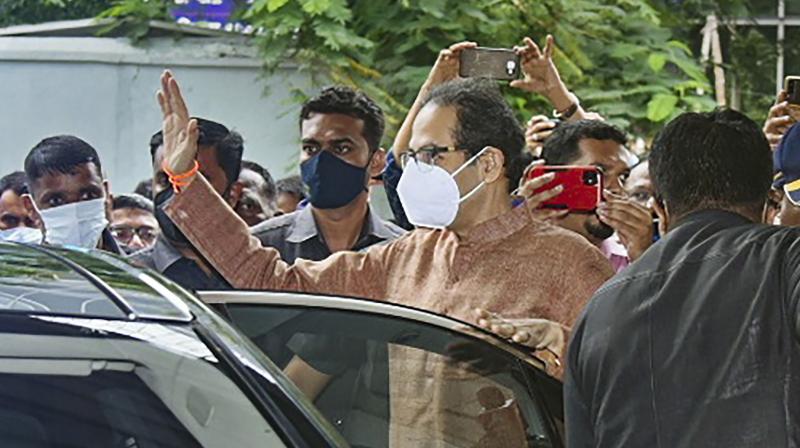 Mumbai: Uddhav Thackeray-led Shiv Sena faction on Tuesday predicted that the Eknath Shinde-led group will remain in power only for the next six months. The Thackeray faction said that Shinde won the trust vote in Maharashtra Legislative Assembly with a "stolen majority".

Maharashtra chief minister Eknath Shinde with the support of BJP’s 106 MLAs on Monday sailed through a trust vote.

An editorial in Shiv Sena’s mouthpiece 'Saamana' on Tuesday said that there is nothing to celebrate or feel disappointed over Shinde’s victory in the Legislative Assembly. The editorial said that Shinde broke away for power and not for any principal.

Accusing Shinde and BJP of not following any ethics, the editorial said,  “After winning the floor test, those who are thinking that this government is not in danger zone for the next six months, are living in illusion. BJP people (leaders) will bring down this government as predetermined and push Maharashtra into midterm elections.”

The Saamana editorial also expressed surprise over the absence of NCP MLAs and senior Congress leaders Ashok Chavan and Vijay Wadettiwar. “Some MLAs of Congress, NCP were absent at the time of the floor test. It is surprising that senior ministers like Ashok Chavan, Vijay Wadettiwar could not reach the Assembly. Fadnavis has thanked the invisible forces that made the floor test successful,” the editorial said.

Taking a dig at Santosh Bangar, an MLA from Hingoli in Marathwada region, for shifting his loyalty to Shinde camp on the eve of the floor test, the editorial said that he was supporting Uddhav Thackeray till the election of the Speaker but nobody knows what happened in 24 hours that he switched to Shinde camp.

Thackeray said that he was “hurt” to see some members ditching the party despite getting benefits and will visit Hingoli soon.

A meeting of district Shiv Sena leaders was held at the government guest house in Hingoli on Tuesday where Thackeray spoke to party workers over the phone.