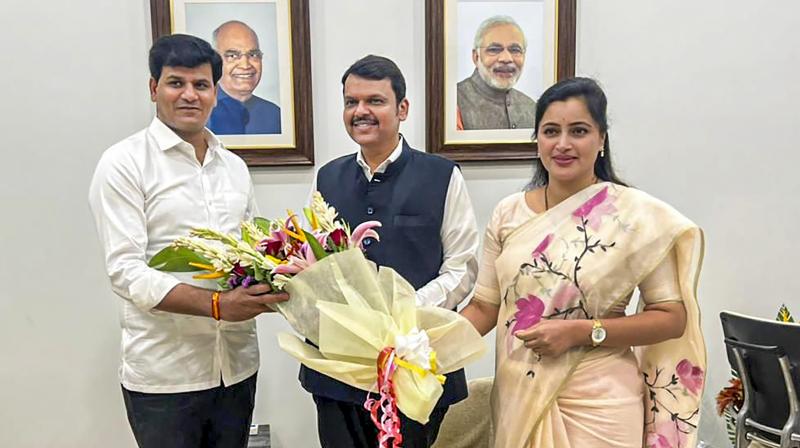 Mumbai: The Shiv Sena on Saturday said former Maharashtra chief minister Devendra Fadnavis taking oath as deputy chief minister was a "shocking climax" to the drama of creating political instability in the state, and questioned the BJP why it did not show a "big heart" by honouring the pact of rotational CM in 2019.

The Sena, in an editorial in its mouthpiece 'Saamana', said that Fadnavis's act of becoming deputy chief minister instead of chief minister is now being defended as an instance of his "big heart" and "adherence to the party's directives".

"With the motive of creating political instability in Maharashtra, a drama was played out, but it is still unclear how many more episodes are yet to unfold. The fast-paced developments have left even the Chanakayas and political pundits stunned as strokes and masterstrokes are being played," it said.

The 'mahashakti' (superforce) behind the entire drama got exposed. Gaining power in Maharashtra through a rebellion in Shiv Sena was the main objective of this whole play, which was enacted in Surat, Guwahati, Supreme Court, Goa, Raj Bhavan and ultimately at Mantralaya (state secretariat), it said.

"However, the climax at the Raj Bhavan was the most shocking part of it. The one who everyone believed would become the chief minister (Fadnavis) had to take oath as the deputy chief minister and vice versa. He accepted the post as the order of the party leadership. But it is now being said in defence that Fadnavis showed a big heart and took up the post (instead of becoming CM himself)," it said.

But had the BJP showed its big heart by keeping its promise (about the rotational chief minister) made to the Shiv Sena two-and-a-half years back, then there was no need for it to present any defence for what happened now, the Uddhav Thackeray-led party said.

A day after the collapse of the Uddhav Thackeray-led Maha Vikas Aghadi (MVA) government due to a rebellion within the Shiv Sena, Fadnavis had on Thursday announced that rebel Shiv Sena leader Eknath Shinde would be the new chief minister, but he himself would not be part of the government. He, however, later took oath as deputy chief minister.

The BJP, notably, is the single largest party in the Assembly.

On Friday, Uddhav Thackeray had said that had Union Home Minister Amit Shah kept his word of rotating the top post in the state in 2019, the BJP would have been steering the government now.

In 2019, the Shiv Sena and the BJP fought the Assembly polls together, but parted ways due to differences over sharing the chief minister's post. The Sena claims it was decided that all posts, including that of the chief minister, would be shared between the two saffron parties.