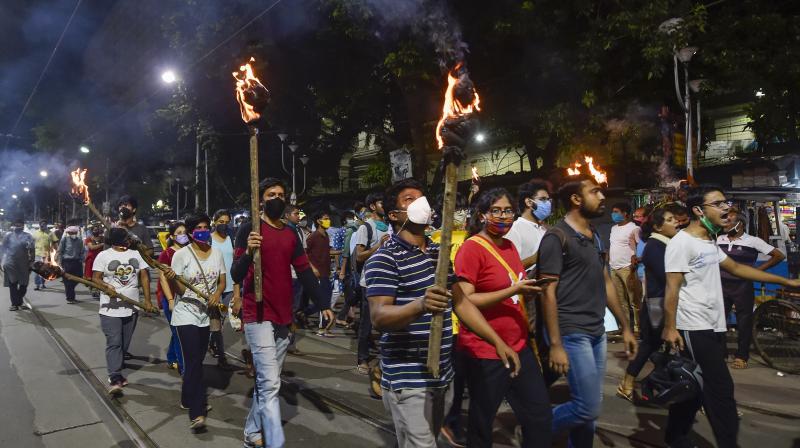 Students during a protest rally in Kolkata over the gangrape of a 19 year old Dalit girl in hathras district of Uttar Pradesh. — PTI photo

New Delhi: The Supreme Court on Tuesday left it to the Allahabad high court to look into all aspects of the 19-year-old Hathras dalit girl’s gang-rape and murder case, including monitoring the investigation by the CBI, protection of the victim’s family and witnesses.

it to future a plea seeking transfer of the trial in the case from Uttar Pradesh to Delhi.

Noting that the crime occurred within the jurisdiction of Allahabad high court and that Lucknow bench of the court has already taken the cognisance of the incident, the top court said that it is “not necessary to divest” the high court of the charge of the case and take upon itself the task of monitoring the proceedings and investigation.

Referring to the affidavit filed by the Uttar Pradesh government detailing steps taken to provide security to the victim’s family and witnesses, the court said,

“We are convinced that steps have been taken by the state government to make adequate arrangement for security to the victim’s family and witnesses.” The court, however, directed that the security be handed over to CRPF to address the “normal perception and pessimism” and to allay all apprehensions.

“The issue as to whether the trial of the case is to be transferred is a matter which is kept open to be considered if need arises in future,” the court said.

The Supreme Court asked the high court to delete the name and relationship of the family members with the victims as depicted in its October 12, 2020, order as per the requirement of the law.