The operation, which saw nine Army personnel losing their lives in separate ambushes on October 11 and 14, entered the 14th day on Sunday 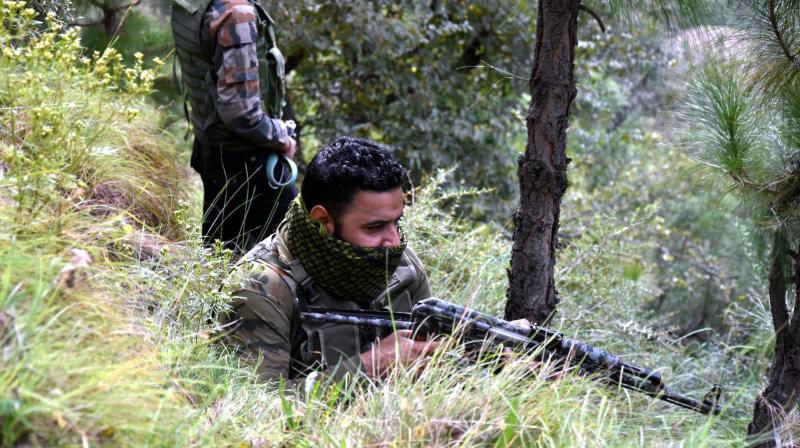 Special Operations Group (SOG) personnel take positions in a forest area during the 12th day of the encounter between security personnel and militants, at Mendhar in Poonch district, Friday, Oct. 22, 2021. (PTI)

Jammu: An arrested Pakistani terrorist was killed, while three security personnel were injured on Sunday when militants opened fire on a joint search party of the Army and police inside a forest in Poonch district of Jammu and Kashmir, officials said.

Heavy firing and explosions were reported from Bhatta Durrian forest of Mendhar which along with nearby forest areas adjoining Surankote (Poonch) and Thanamandi in Rajouri district is witnessing a massive search operation, the officials said.

The operation, which saw nine Army personnel losing their lives in separate ambushes in Surankote and Mendhar on October 11 and 14, entered the 14th day on Sunday.

A police spokesperson said two policemen and an Army jawan along with a prisoner Zia Mustafa, a Pakistani terrorist affiliated with the Lashkar-e-Toiba (LeT) were injured in firing by terrorists in Bhatta Durrian forest this morning.

Detenue Mustafa was taken to Bhatadurian for identification of terrorist hideout during the ongoing operation in which three Army jawans and a JCO were martyred (on October 14).

"'During the search when the team approached the hideout, terrorists again opened fire on the joint team of police and Army personnel in which two policemen and an Army jawan sustained injuries, the spokesperson said.

The police said Mustafa also sustained injuries and he could not be taken out from the site due to heavy fire.

During the subsequent operation additional reinforcements were sent and the body of Mustafa has been retrieved from the encounter site, the spokesperson said, adding the operation (to neutralise the hiding terrorists) is in progress and legal process has been initiated in connection with the killing of the Pakistani terrorist.

Officials said Mustafa, a resident of Rawalakot in Pakistan occupied Kashmir, was lodged in Kot Bhalwal jail for the last 14 years and was shifted to Mendhar on police remand after investigation revealed his link with the hiding terrorists.

Mustafa had sneaked into this side from the same route before he was arrested from south Kashmir, the officials said.

The operation in the forest areas in the twin border districts commenced on October 11 when terrorists ambushed a search party killing five soldiers including a Junior Commissioned Officer (JCO) in Surankote forest of Poonch before another gunfight in nearby Thanamandi on the same day.

On October 14, the terrorists struck again and killed four soldiers including a JCO in Nar Khas forest in Mendhar as the security forces extended the cordon and search operation to neutralise the fleeing terrorists.

Drones and helicopters were pressed into service to assist the marching troops, which included para-commandos, in the jungle at a distance of four km from the Line of Control (LoC), the officials said.

Ten persons, including two women, were detained for questioning after it came to light that they allegedly provided logistic support including food and shelter to the terrorists, the officials said.

An Army official said on Saturday that a major part of the forest was cleared and now the search area is restricted to a location housing a number of natural caves.

There was no contact with the terrorist after the initial gunfights on October 11 and October 14. The search area was expanded in search of the terrorists, the official had said, hoping to conclude the operation with the clearance of the natural caves within a day or two depending on the weather conditions.

Traffic between Mendhar and Thanamandi along the Jammu-Rajouri highway remained suspended as a precautionary measure for the ninth day on Sunday in the wake of the ongoing operation.

Rajouri and Poonch in Jammu region have witnessed a rise in infiltration attempts since June this year, resulting in the killing of nine terrorists in separate encounters.