Shot in arm for CPM govt as governor reads out portions critical of CAA in policy address. 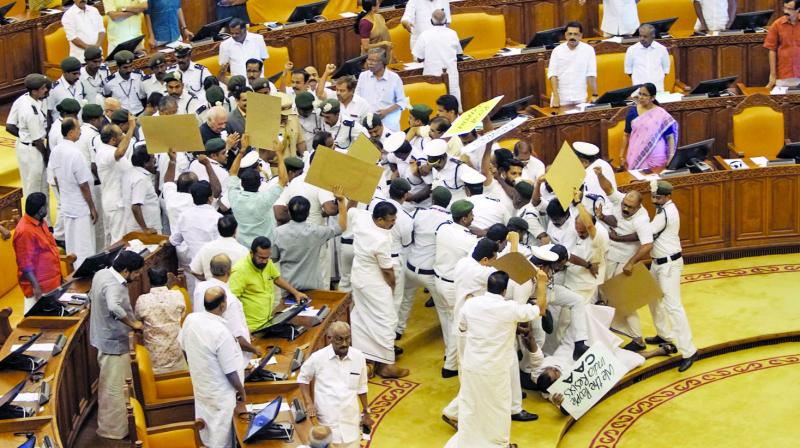 Security personnel help Kerala governor Arif Mohammed Khan as he is blocked by protesting Opposition legislators on his arrival into the house in Thiruvananthapuram on Wednesday. (Photo: PTI )

THIRUVANANTHAPURAM: The CPM-led LDF Government in Kerala received a shot in the arm with governor Arif Mohammad Khan, who had taken a strident position against the state government’s opposition to Citizenship Amendment Act (CAA), reading out the portions that were highly critical of the Centre’s new law.

Chief minister Pinarayi Vijayan had sent a missive to Raj Bhavan on Tuesday night categorically stating that the government wanted the policy address to be delivered in the House in its entirety.

The governor, in his reply, sent on Tuesday midnight reiterated his earlier position, defending the CAA.

The ruling front kept its fingers crossed over Government’s stand vis-a-vis policy address till the beginning of the session on Wednesday.

Before reading the controversial portions, he reiterated that the CAA does not come under the definition or programme of the government.

“I am reading this paragraph because the honourable chief minister wants me to read this. Although I hold the view that this (CAA) does not come under the definition of policy or programme of state government,” he said, adding that the chief minister has said in his letter that this is the view of the government.

Mr Khan further said that to honour the CM’s wish, despite his disagreement, he would read the paragraph.

And what he read out subsequently was diametrically opposite to the views of Modi Government on the CAA.

“Our citizenship can never be on the basis of religion. Secularism is the basic structure of our constitution. This august body unanimously passed a resolution requesting the centre to abrogate the Citizenship Amendment Act, which my government believes, goes against the cardinal principles underlying in our constitution. Pursuant to this, my government filed a suit in the Supreme Court invoking provisions Article 131 of the constitution. A strong state and strong centre are pillars of our federalism. The voices of genuine apprehensions of the states need to be considered by the central government in the right spirit keeping broad national interest in mind particularly when Constitutional values are involved. There are widespread anxieties and apprehensions among a large number of our citizenry.”

The members of treasury benches thumped the bench loudly as Governor read out the paragraph which till then many believed he would skip.

So what made the governor take a different route in House?  Many say it was the opposition notice to Speaker for bringing a resolution in Assembly for the recall of the Governor.

Mr Khan is believed to have got an assurance from the government that it would not support the opposition’s move for his recall.The opposition notice will come up before the Business Advisory Committee on Friday.