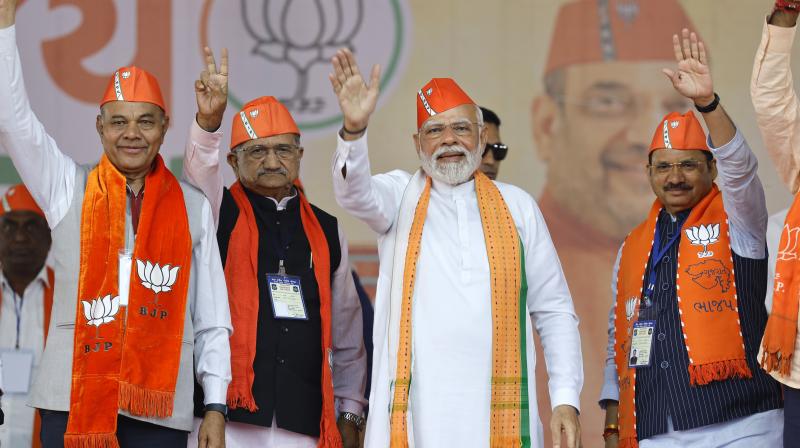 Prime Minister Narendra Modi with other BJP leaders waves at supporters at a public meeting ahead of the Gujarat Assembly elections, in Kheda district, Sunday, Nov. 27, 2022. (PTI Photo)

New Delhi: Addressing the nation during the 95th episode of the monthly radio programme "Mann Ki Baat", Prime Minister Narendra Modi on Sunday said assuming the G-20 presidency is a huge opportunity for India and the country must utilise it by focusing on global good. During his radio address, the Prime Minister talked about various issues, including the launch of VIKRAM-S, the first rocket of the indigenous space start-up.

India will officially assume the G-20 presidency from the current chair Indonesia on December 1. Noting that assuming the G-20 presidency is a "big opportunity" for India, Mr Modi said, "We have to make full use of this opportunity and focus on global good and world welfare. Whether it is peace or unity, sensitivity towards the environment or sustainable development, India has solutions to challenges related to these."

The Prime Minister said that India’s G-20 presidency theme -- "One Earth, One Family, One Future" -- shows our commitment to Vasudhaiva Kutumbakam (world is one family).

He also talked about the unique gift, a handwoven G-20 logo, sent by a weaver from Telangana and that he has received many letters saying "their hearts have swelled with pride at the country hosting such a big summit."

Mr Modi said that reading letters from villages and cities, listening to audio messages from children and elders before the radio programme "is like a spiritual experience for me".

During his monthly address, Mr Modi said that in space technology, world-class standards at a low cost are now the hallmark of India.

Elaborating on the special features of the Vikram-S rocket, Mr Modi said that it is lighter than other rockets and also cheaper. Its development cost is much less than the cost incurred by other countries involved in space missions, he said.

Highlighting how some crucial parts of this rocket have been made through 3D printing, Mr Modi said, "The name ‘Prarambh’ given to the launch mission of Vikram-S suits it perfectly. This marks the dawn of a new era for the private space sector in India. This is the beginning of a new era full of self-confidence for the country."

Stressing on the need to preserve the country's traditions and traditional knowledge and to promote them, Mr Modi cited an organisation engaged in the revival of the various facets of the Naga cultures, which were on the verge of being lost.

"We all always take pride in the fact that our country is home to the oldest traditions in the world... Therefore, it is also our responsibility to preserve our traditions and traditional knowledge, to promote it and to take it forward as much as possible... One such commendable effort is being made by some friends of our northeastern state of Nagaland," said Mr Modi.

Noting some of the challenges being faced in the field of medical research about muscular dystrophy, he talked about Manav Mandir, an institute in Himachal Pradesh's Solan, which he said has "become a new ray of hope for the patients".

"Manav Mandir is being run by the Indian Association of muscular dystrophy. It is a wonderful example of human service true to its name... A challenge associated with muscular dystrophy is also a lack of awareness about it. That's why this centre organises awareness camps for patients not only in Himachal Pradesh but also across the country. The most encouraging thing is that the management of this organisation is mainly done by people suffering from this disease," said the PM.

Talking about advancements in the field of music, Mr Modi said that in the last eight years, the export of musical instruments from India has increased by three-and-a-half times.