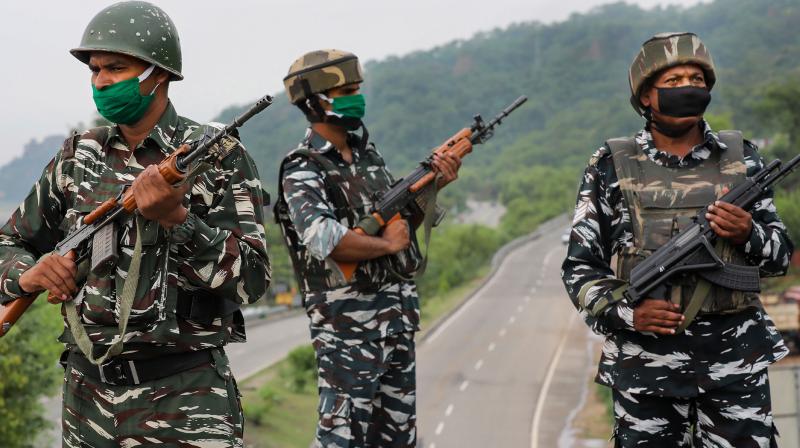 Srinagar: Two Army jawans were killed in a sneak attack by three car-borne militants on Srinagar’s outskirts on Thursday. The police and witnesses said the gunmen appeared at Aban Shah Chowk in Khoshipora area and opened fire on an Army quick reaction team, critically injuring two soldiers. Both succumbed to their injuries while being evacuated to a hospital at the nearby Shariefabad Army cantonment, officials said.

The slain soldiers were identified as Sepoy Rattan Lal of 163 Territorial Army and Sepoy Deshmukh of 101 Territorial Army. They were attached to 2nd Unit of Rashtriya Rifles, the Army’s counter-insurgency unit. One report said the assailants also decamped with the service rifle of one of the slain jawans.
Soon after the attack, the Army’s 2 RR and the J&K police’s Special Operations Group launched a search operation in the area, as the Army pressed a helicopter into service to hunt the militants and the Maruti car used to carry out the attack.
The Army said in a statement: “Terrorists fired indiscriminately at Quick Reaction Team of Indian Army in Khushipora. Being a crowded area, troops exercised restraint to avoid any civilian casualties.”

It added: “Two soldiers were critically injured and were evacuated to the nearest medical facility. However, they have succumbed to their injuries.
The area has been cordoned and a search operation is in progress.”
A civilian was, meanwhile, hurt in mortar shelling by the Pakistan Army along the LoC in Kirni village of Poonch district, officials said Thursday.