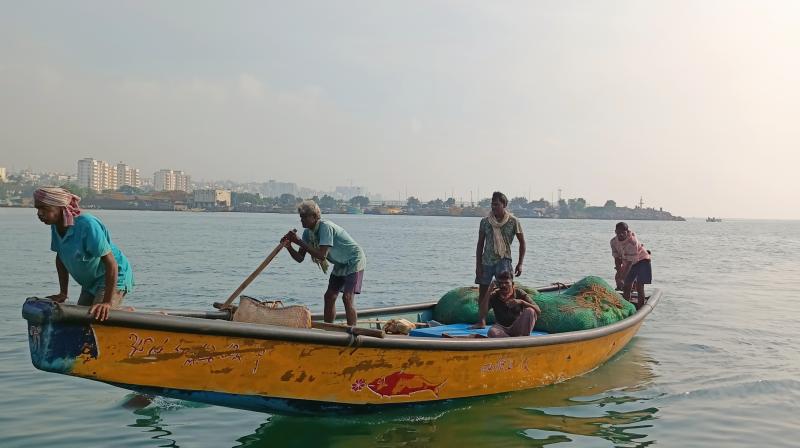 Fishermen returning back to the coast in Visakhapatnam. (Photo: V.Kamalakara Rao/DC)

Bhubaneswar: Heavy rains lashed Odisha's southern and coastal regions in the wake of cyclone Gulab', which is likely to make landfall between Gopalpur and Kalingapatanam in Andhra Pradesh around midnight, the India Meteorological Department said.

The cyclone, the second to hit the state in four months, lay centered about 140 km east-southeast of Gopalpur and 190 km east-northeast of Kalingapatnam, the IMD said.

The Odisha government has already mobilised men and machinery, and launched an evacuation drive in seven identified districts in the southern parts of the state.

As many as 42 teams of the Odisha Disaster Rapid Action Force (ODRAF) and 24 squads of the National Disaster Response Force (NDRF), along with about 102 teams of fire brigade personnel, have been dispatched to the seven districts, Special Relief Commissioner (SRC) P K Jena said.

The IMD has sounded a 'red alert' along the coasts of Andhra Pradesh and Odisha, alerting the officials concerned to start the preparatory activity of cyclone 'Gulab'.

Currently, the Doppler Weather Radar in Vishakhapatnam is monitoring the movements of the cyclone.

From early Sunday morning, light to moderate rainfall is being observed along the coasts of both the states.

Gulab, which was located over northwest and adjoining west-central Bay of Bengal, moved nearly westwards with a speed of 17 kmph so far, as per the track report given today morning.

It is likely to move westwards and cross Andhra Pradesh-Odisha coasts between Kalingapatnam and Gopalpur.

It will be converting into a 'cyclonic storm' around midnight, with a maximum wind speed of 75-85 kmph, which can rise to 95 kmph.

The Navy has charted out preparatory activities, with Flood Relief Teams and Diving Teams being prepositioned alongside the coasts of Odisha and Visakhapatnam to render immediate assistance.

Two Naval ships have been assigned near the sea with Humanitarian Assistance and Disaster Relief (HADR) material and medical teams.

The Navy has also kept ready its aircraft Visakhapatnam's INS Dega station and Chennai's INS Rajali station to undertake an aerial survey of the most affected areas, casualty evacuation, and airdrop of relief material as required.

Kalingapatnam coast has been affected twice by cyclones, one being Cyclone Pyaar, dating back to September 2005, and the other one being the latest one, Cyclone Gulab, a source from IMD told this newspaper.