Maharashtra CM: Don't use Balasaheb name, use your father's name 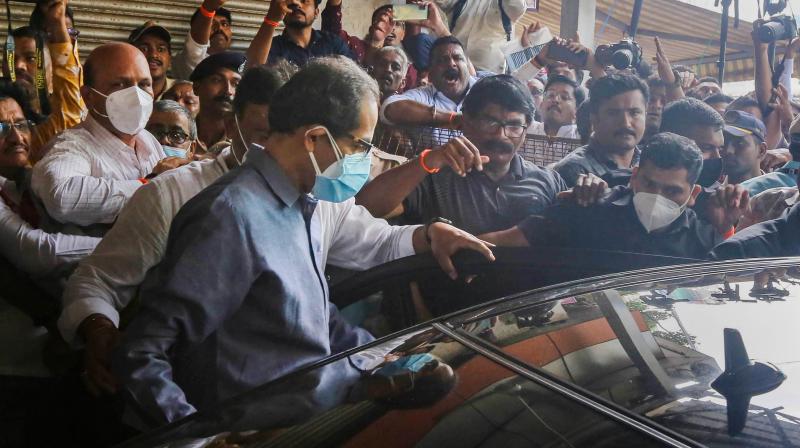 Mumbai: Taking an aggressive stand against the rebel Shiv Sena MLAs, Chief Minister Uddhav Thackeray on Saturday said they should seek votes in their father’s name. Speaking at the party’s national executive meeting held at party headquarters Sena Bhavan, Thackeray said that the rebels would not be allowed to use the name of Bal Thackeray to seek votes.

The national executive passed six resolutions, one of which authorised Thackeray all the powers to take action against Eknath Shinde and his supporter MLAs. Another resolution said that only the Shiv Sena is allowed to use Bal Thackeray’s name.

After the meeting, Shiv Sena spokesperson Sanjay Raut said that the Sena chief Uddhav Thackeray has been conferred all the rights to take immediate stern action against rebel MLAs and party office bearers.

“Nobody will be allowed to use Bal Thackeray’s name for their political interest. Legal action would be taken against them. One more important thing that Uddhav ji said was that in future they should seek votes in their father’s name. They should not seek votes in the name of Shiv Sena’s father (Bal Thackeray). He belongs only to Shiv Sena,” Raut added.

According to the party sources, the resignation would be taken of all the ministers, who have defected, in the next 24 hours. “The betrayal of the rebel Shiv Sena MLAs will not be forgotten,” Yuva Sena chief Aaditya Thackeray said.
Reacting to senior Thackeray’s comment, the Raj Thackeray-led Maharashtra Navnirman Sena said that Bal Thackeray is an ideology. "When they (Shiv Sena) wanted to make the mayor’s bunglow a memorial for Balasaheb, they said Balasaheb belongs to the entire Hindustan. Now they are claiming he is their private property," MNS leader Sandeep Deshpande said.

One of the rebel MLAs, Deepak Kesarkar, said, “We have not left Shiv Sena. We are not going to merge with anyone. We will be setting up a separate block of the party. I have always told the CM that the Sena needs to be with the BJP. The synergy between a BJP Prime Minister and the state CM is important for the development of the state. We also want to tell the CM to fulfil his constitutional responsibility and ensure that the violence is curbed. We do not feel safe to return as no action is being taken against the perpetrators."

"Recognition should be given to our faction, if it isn’t given, we will go to court and prove our existence, numbers. We have numbers, but we respect CM Uddhav Thackeray, we won’t speak against him. We must follow the path on which we fought the Assembly elections," Mr Kesarkar added.

Meanwhile, the deputy Speaker of the Maharashtra Assembly has issued a disqualification notice to 16 rebel Shiv Sena MLAs of the Shinde camp who are currently in Guwahati. They have been given time till June 27 to file their written replies.

In the summon, which is accessed by this newspaper, the MLAs have also been informed that if they fail to give their replies to the deputy Speakers with appropriate documents, it would be deemed that they don’t want to say anything and accordingly, a decision would be taken.

Mr Kesarkar said that a whip is applicable only on the floor of the Assembly and that nobody can be disqualified for not attending a party meeting. He also said that the notice is against the principle of natural justice. "The notice gives only 48 hours to respond when there is no urgency. We will seek a week’s time and give appropriate reply to it," he said.

The Eknath Shinde-led faction announced that it was naming itself the "Shiv Sena Balasaheb Group". "If anyone has a problem if we use the name of Balasaheb, we will call ourselves only Shiv Sena.