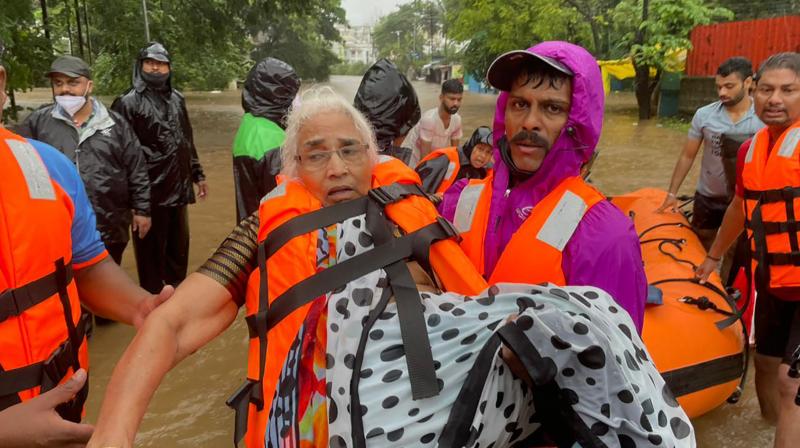 Mumbai: At least 75 people have been killed in a series of landslides caused by heavy rains in Western and Konkan regions of Maharashtra since Thursday night. Search, rescue and relief operations are being carried out by Army, Navy, Air Force, Coast Guard, NDRF and Maharashtra government agencies. Close to 53 people were still missing in Raigad district. Mumbai-Goa and Mumbai-Bangalore National Highways have been shut because of floods.

A senior government official said that Mumbai-Goa national highway has been closed due to floods, which damaged the 78-year-old bridge on Vashishti river. Mumbai-Bangalore National Highway was also shut down due to overflowing of the Panchganga river near Kolhapur city at 4.30 pm. The water level in Panchganga is increasing. Therefore, all types of vehicles have been stopped to use this highway.

“The bridge at Chiplun would be repaired by Saturday noon. Till then all the vehicles have been stopped on this road. Unless the water level in Panchganga recedes, the traffic movement would not be allowed on Mumbai-Banglore Highway,” the official said.

Several videos from flooded areas have gone viral. In one of the videos, a crocodile was seen floating in the floodwaters of Chiplun. Another terrifying video from Chiplun shows a few people trying to pull up a woman from a flooded area using a rope. The woman clings on to the rope as she is pulled up, but just as she nears the terrace of the building, the rescuers lose grip and falls into the water.

District Information Officer of Ratnagiri said that landslides were reported at four places leading to flood-like situation. A total 24 people were killed due to the flood. “Of these, eight were Covid patients at a hospital in Chiplun. Flood water entered into the first floor of the hospital leading to disruption in power supply. As a result, ventilators and oxygen units did not work leading to deaths of eight patients,” the officer said.

“Looking at the current situation, the state has demanded additional eight NDRF teams from Bhuneshwar in Odisha,” the senior official said.

Maharashtra Chief Minister Uddhav Thackeray announced financial assistance to the deceased of the kin. Thackeray also held a meeting with senior IAS and IPS officers at control room of  disaster management unit in Mantralaya. After taking the flood review meeting at Mantralaya, the CM told reporters that Prime Minister Narendra Modi had called him and assured him that all kinds of assistance would be provided to Maharashtra.