It also said BA.2 lineage, an infectious sub-variant of Omicron, has been found in a substantial fraction in the country 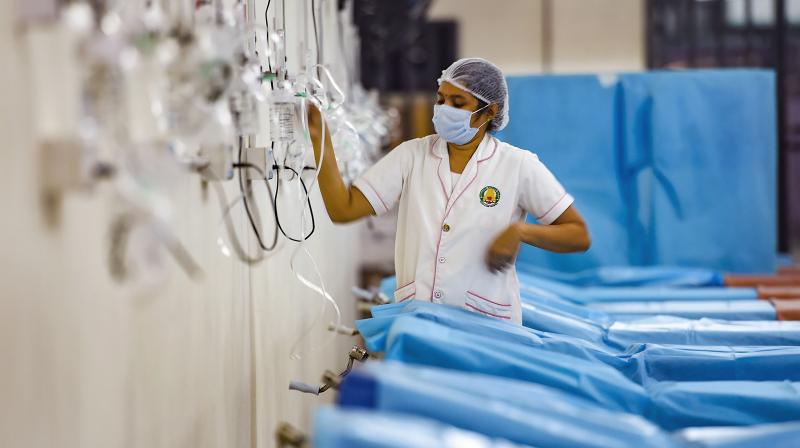 New Delhi: The Centre’s Covid-19 research body has said that the Omicron variant of the deadly virus is in the community transmission stage in the country and has become dominant in several metros where new cases have been spiking exponentially. It also said that BA.2 lineage, an infectious sub-variant of Omicron, has been detected in a considerable fraction in India.

The third Covid-19 wave, driven by the Omicron variant, saw India logging 3,33,533 fresh infections and 525 related deaths, including backlog, in the last 24 hours. The daily positivity rate has increased marginally to 17.78%, as compared to Saturday when it stood at 17.22%. The country has 21,87,205 active cases. The highest active caseload of over 35 lakh was recorded during the second wave of the pandemic.

Like Delhi, there has also been a significant drop of Covid-19 cases in Mumbai. The country’s financial capital reported 2,550 new Covid-19 cases and 13 deaths in 24 hours. The city is now left with 19,808 active cases.
In its latest bulletin, the INSACOG, however, said that further spread of Omicron in the country is now expected to be through internal transmission, not foreign travellers, and a revised sampling and sequencing strategy is being worked out to address genomic surveillance objectives in the wake of dynamic changing scenario of virus infection.

The INSACOG, under the Union health ministry, reports genomic surveillance of SARS CoV-2 across the country through sequencing of samples from sentinel sites and also detailed state-wise district analysis for some states. A total of 1,50,710 samples have been sequenced and 1,27,697 samples have been analysed so far by INSACOG.

The research body said: “Omicron is now in community transmission in India and has become dominant in multiple metros, where new cases have been rising exponentially. BA.2 lineage is in a substantial fraction in India and S gene dropout based screening is thus likely to give high false negatives.” S-gene dropout is a genetic variation like that of Omicron.

The INACOG said: “The recently reported B.1.640.2 lineage is being monitored. There is no evidence of rapid spread and while it has features of immune escape, it is currently not a variant of concern. So far, no case has been detected in India.”

A preliminary analysis by IIT-Madras has, meanwhile, revealed that India’s R-value, which indicates the rate of spread of coronavirus, has further reduced to 1.57 from January 14-21 and the national peak of the third wave of the infection is expected to come in the next fortnight. R-value indicates the number of people an infected person can spread the disease to. A pandemic is considered to end if this value goes below 1.
According to the analysis, the R-value was recorded at 1.57 between January 14 and January 21. The number was recorded at 2.2 in the week of January 7-13 while it was 4 from January 1-6 and 2.9 from December 25-31.  The preliminary analysis was done by computational modelling by IIT Madras’ Department of Mathematics and Centre of Excellence for Computational Mathematics and Data Science headed by Prof Neelesh S. Upadhye and Prof S. Sundar.

The data showed that the R-value of Mumbai was 0.67, Delhi 0.98, Chennai 1.2 and Kolkata 0.56.  Dr Jayant Jha, Assistant Professor, Department of Mathematics, IIT Madras, said the R-value of Mumbai and Kolkata shows that peak is over there and it is becoming endemic while for Delhi and Chennai it is still close to 1. “The reason for that could be that as per the new ICMR guidelines they have removed the requirement for contact tracing and therefore there are less infections as earlier,” he told a news agency.

The ICMR has issued guidelines as per which contacts of coronavirus patients do not need testing unless identified as high-risk based on age or comorbidities. Dr Jha said as per their analysis, the coronavirus peak is likely to come in the next 14 days till February 6.  The earlier prediction was that the peak of the third wave is likely between February 1 and February 15.