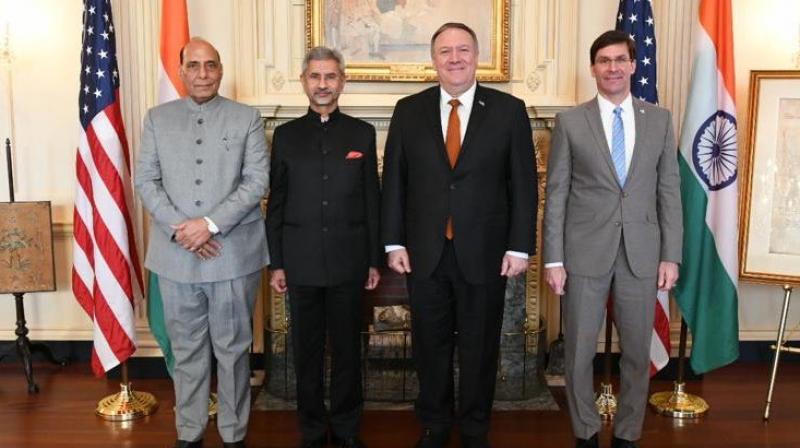 New Delhi: India and the United States could ink the Basic Exchange and Cooperation Agreement (BECA) defence pact for “greater geospatial information-sharing” during the forthcoming Indo-US 2+2 talks at the foreign and defence ministerial level on October 27.

According to reports, the BECA pact will enable India to use US geospatial intelligence and satellite imagery to improve the accuracy of missiles and drones, a development that could prove crucial amid the situation in the Ladakh sector where there is heavy deployment of both Indian and Chinese troops backed by tanks and heavy artillery on both sides.

The BECA is the third proposed defence pact between the two countries after the signing of the Logistics Exchange Memorandum of Agreement (LEMOA) in 2016 and the Communications Compatibility and Security Agreement (COMCASA) in 2018.

United States Secretary of State Michael R Pompeo and Secretary of Defense Mark T Esper will visit New Delhi on October 26 and 27 and will hold talks with their Indian counterparts S Jaishankar and Rajnath Singh on October 27 as part of the Indo-US 2+2 talks. In addition, New Delhi also said on Thursday that they will also be meeting National Security Advisor (NSA) Ajit Doval apart from jointly calling on Prime Minister Narendra Modi.

On Thursday, MEA Spokesperson Anurag Srivastava said, “The previous two Dialogues were held in New Delhi in September 2018 and in Washington DC in December 2019. The discussions in these Dialogues have enabled both sides to further progress the bilateral relationship and strengthen the institutional framework for cooperation across all sectors.  India and US have a comprehensive global strategic partnership which includes political, security and defence, economic, commercial, technology and people to people contacts.  We have regular dialogue for various levels to discuss ongoing bilateral cooperation and to exchange views on developments in the region.”