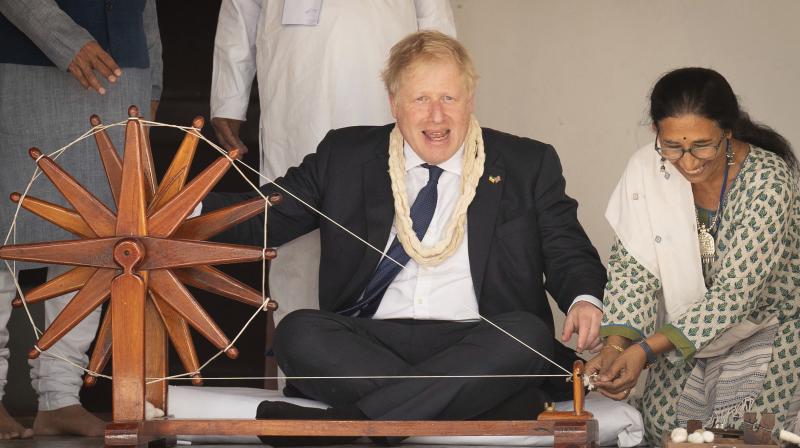 British Prime Minister Boris Johnson is shown how to operate a cotton wheel at Mahatma Gandhi's house at the Sabarmati Ashram in Ahmedabad during a cultural tour as part of his two day visit to India, April 21, 2022. AP/PTI

On his arrival, the British PM was received by Gujarat chief minister Bhupendra Patel. Mr Johnson was accorded a grand welcome along the 4-km route from the airport to a hotel in Ahmedabad. This is a first-ever visit by a British PM to Gujarat. His engagements in Gujarat included visits to the famous Akshardham temple of the Swaminarayan sect in Gandhinagar.

Mr Johnson will reach New Delhi late Thursday night. On Friday he will hold detailed talks with Mr Modi on the entire gamut of bilateral ties as well as discussions on global issues, including the Ukraine conflict, cooperation in the Indo-Pacific region and strengthening of defence and security ties, besides talks on the proposed Free Trade Agreement (FTA).

“Yes, I am looking forward to our conversation. We will talk about trade, security and about issues of importance,” Mr Johnson told reporters in Ahmedabad when asked about the agenda of his meeting with Mr Modi.

On the Ukraine conflict the British PM said: “Well, we have already raised the issue of Ukraine with Prime Minister Modi diplomatically. Actually, they (India) were very strong in condemnation of atrocities in Bucha. I think everybody understands India and Russia have historically had very different relationships, like Russia and UK in the last couple of decades.” He added: “We have to reflect that reality while talking about it (Ukraine) to Narendra Modi.”

In a statement highlighting the trade and investment aspect, the British high commission in New Delhi said that UK and Indian businesses will confirm more than £1 billion in new investments and export deals, which will create almost 11,000 jobs across the UK. The deals include a new switch mobility electric bus R&D centre in the UK and the opening of their Asia-Pacific headquarters in Chennai, generating over 1,000 jobs. It also includes investment by leading Indian manufacturer Bharat Forge and electric truck maker Tevva Motors to expand to a new site in the south-east and create 500 new jobs, Indian software company Mastek investing £79 million to create 1,600 jobs in the next three years all over the UK, business consultancy FirstSource opening new offices in South Wales, the Midlands and cities in the North-East and North-West, Hertfordshire-based firm Smith & Nephew agreeing a major export deal to sell robotic surgical systems in India and Northamptonshire business Scott Bader opening a new resins factory to supply top renewable energy companies in Southeast Asia.

“The PM will also welcome OneWeb signing a historic contract for satellite launches with New Space India Ltd, the commercial arm of the Indian Space Research Organisation. OneWeb is an innovative UK-based satellite communications company, which the government has invested in to put the UK at the forefront of rapidly evolving space technologies. This agreement with India is a significant development for the company’s operations,” the high commission added.

On the first leg of his trip, Mr Johnson held a meeting with industrialist Gautam Adani at the Adani Group’s global headquarters at Shantigram, on the outskirts of Ahmedabad. “Honoured to host @BorisJohnson, the first UK PM to visit Gujarat, at Adani HQ. Delighted to support the climate & sustainability agenda with focus on renewables, green H2 & new energy. Will also work with UK companies to co-create defence & aerospace technologies. #AtmanirbharBharat,” Mr Adani tweeted later.

News agencies quoted sources as saying the two discussed, among other things, key sectors such as energy transition, climate action, aerospace and defence collaboration. With India set to invest $300 billion by 2030 to modernise its armed forces, the sources said collaboration in the defence sector was one of the key focus areas of the meeting between Mr Adani and Mr Johnson. Mr Adani announced an academic facilitation programme for young Indians through the Chevening Scholarship, one of the most prestigious international scholarships offered by the UK government.

Mr Johnson opened JCB’s latest factory in Halol in Panchmahal district of Gujarat with a 100-million-pound investment, which will fabricate parts for global production lines. With 11 factories in the UK, employing over 7,500 people, JCB first began manufacturing in India in 1979 and is now the country's leading producer of construction equipment.

“It (the trip) has been absolutely fantastic so far and it’s great to be here in Gujarat. Gujarat is a great place and you know we have a huge Gujarati community, which is like a living bridge between India and the UK,” Mr Johnson said.

The visit to the Sabarmati Ashram also delighted Mr Johnson. “It is an immense privilege to come to the ashram of this extraordinary man and to understand how he mobilised such simple principles of truth and non-violence to change the world for better,” Mr Johnson wrote in the visitors’ book at the Gandhi ashram.

At the ashram he tried his hand at the charkha at Hriday Kunj, the hut where Gandhi lived. A replica of the charkha was presented to him. The Sabarmati Ashram Preservation and Memorial Trust also gifted two books to him. One of them was “Guide to London”, an unpublished book which consists of Gandhi’s suggestions on “how to live in London”. The other was The Spirit’s Pilgrimage, an autobiography of Mirabehn, or Madeleine Slade, one of Gandhi’s British-born followers.