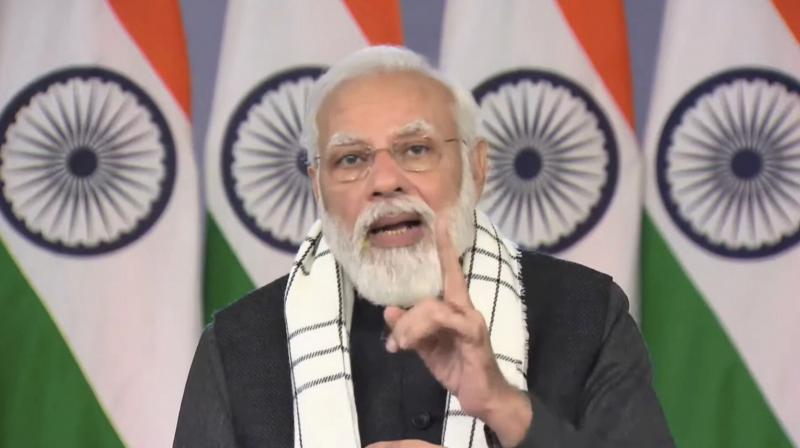 New Delhi: Prime Minister Narendra Modi on Saturday asked district magistrates to work on time-bound targets to increase ease of living for people and asserted that the country's goal today is to achieve 100 per cent saturation of services and facilities.

Modi also called for a direct and emotional connection between administration and the public to ensure 'top to bottom' as well as 'bottom to top' governance flow.

In his remarks at the virtual interaction with DMs and some chief ministers, Modi said the teamwork of Centre, states and local administration was yielding good results in aspirational districts.

The prime minister said that these districts have proved that due to the elimination of silos in implementation, optimum utilisation of resources takes place.

He emphasised the exponential benefits of this reform and said when silos end, one plus one doesn't become two but eleven.

"We see this collective power in the aspirational districts today," Modi said.

Launched by the prime minister in January 2018, the aspirational district's programme aims to quickly and effectively transform 112 most under-developed districts across the country.

The prime minister said various ministries and departments of the government have prepared a list of 142 districts that are not so much lagging in development but are weak on one or two parameters.

He stressed the need to work with the same collective approach as is being done in the aspirational districts.

The prime minister told the DMs that seeing the successes achieved in the aspirational districts, the country has now expanded its targets further.

The prime minister drew the attention of the officers towards the changed mindset and reiterated that today, the country's goal is to achieve 100 per cent saturation of services and facilities.

"We have a long way to go compared to the milestones we have achieved so far and have to work on a much bigger scale," he said and called for time-bound targets for taking roads to all the villages of the districts, Ayushman Bharat cards, bank accounts to every person, Ujjwala gas connection, insurance, pension housing for everyone.

Modi also pitched for a two-year vision for every district.

He suggested that every district can identify 10 tasks to be completed in the next three months to improve ease of living for common people.

Similarly, five tasks may be associated with the Azadi Ka Amrit Mahotsav, he added.

The prime minister said the country is witnessing a silent revolution in the form of Digital India and no district should be left behind in this.

He pointed out the importance of digital infrastructure reaching every village and becoming a means of door-step delivery of services and facilities.

Modi also asked NITI Aayog to devise a mode of regular interaction between the district DMs.

During the interaction, the district magistrates shared their experience which has led to the improvement of the performance of their districts on a host of indicators.

The prime minister sought direct feedback from them about the key steps taken by them which have resulted in success in the districts, and about the challenges faced by them in this endeavour.

He also asked them about how working under the aspirational district's programme has been different from their work done earlier.

The officers discussed how JanBhagidari has been a key factor behind this success, and also spoke about increased inter-departmental coordination and the benefits of data-driven governance.

The CEO of NITI Aayog, Amitabh Kant, gave an overview of the progress and implementation of the Aspirational District programme and mentioned how it leveraged competitive and cooperative federalism, driven by a Team India spirit.

The Rural Development Secretary gave a presentation on a mission to uplift 142 selected districts, on the lines of the focussed work done in the aspirational districts.

The Centre and states will work together to uplift these identified districts by addressing the pockets of under-development, the Prime Minister's Office said in a statement.

"Today we are seeing this history being made in the aspirational districts of the country, '' he added.

The prime minister noted that convergence is a major reason for the country's success in the aspirational districts.

He noted that during the last four years, Jan-Dhan accounts have increased by 4-5 times in almost every aspirational district. Almost every family has got a toilet and electricity has reached every village, he said.

A new energy has been infused in people's lives, he added.

The chief ministers of states such as Gujarat, Karnataka and Chhattisgarh also participated in the interaction.

The interaction was aimed at taking direct feedback about the progress and status of the implementation of various government schemes and programmes.