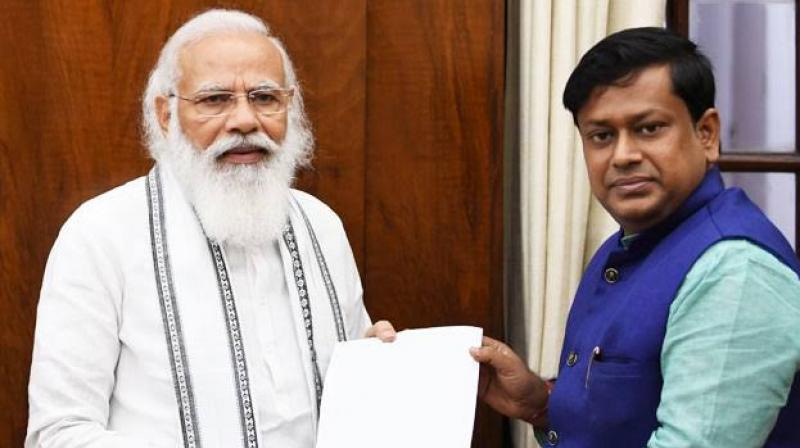 Kolkata/New Delhi: In a major organisational reshuffle, the BJP on Monday abruptly removed its Midnapore MP Dilip Ghosh from the West Bengal unit president's post. The move follows the party's whitewash in the recent Assembly election in the state and defections of four party MLAs and two-time Asansol MP Babul Supriyo to the ruling Trinamul Congress.

First-time BJP MP of Balurghat, Sukanta Majumdar, who was among the front-runners for the state chief's post but has maintained a low profile so far, has replaced Mr Ghosh. Both of them are from the RSS.

Mr Ghosh, infamous for his making controversial statements and known for having a strained relationship with Mr Supriyo and party MLA of Nandigram Suvendu Adhikari after he became the leader of the Opposition in the state, headed the state BJP since 2015 in two consecutive terms which included his re-election in January of 2020.

His removal, however, came a month after he claimed that he would continue in his role till December next year even as party's national president J.P. Nadda sought from him the names of probables to pick his successor.

Mr Ghosh has been promoted to BJP national vice president, a post held by Krishnanagar MLA Mukul Roy before his switch to the TMC. The BJP MP's new task is expected to come as a relief to Mr Adhikari since their style of functioning is very different.

The BJP has also appointed former Uttarakhand governor, Baby Rani Maurya, who recently resigned from the constitutional post, as its national vice president. Ms Maurya, a Dalit leader, is expected to play a role in the coming Assembly polls in Uttar Pradesh, her native state.