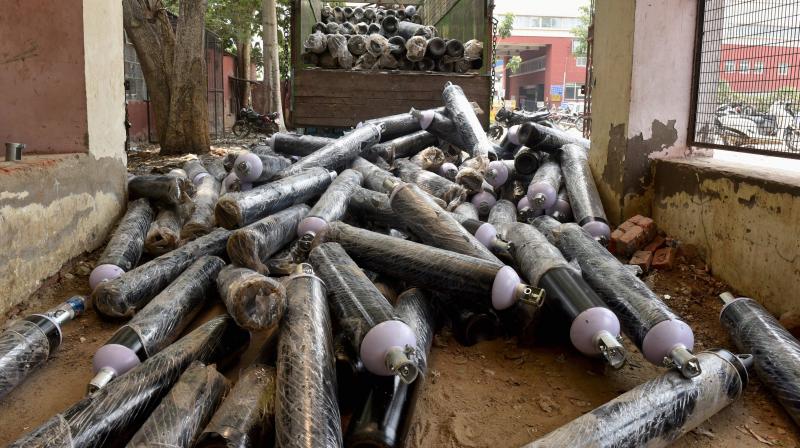 Kejriwal, who is in isolation after his wife tested positive for coronavirus on Tuesday, had on Sunday termed the shortage of oxygen for coronavirus patients an “emergency”. — PTI file photo

NEW DELHI: As Delhi reeled under grief and anxiety with rising cases of Covid-19 and social media sites flooded with SOS messages from people seeking assistance in getting a hospital bed, oxygen cylinders or medicines, the Delhi government made a fervent plea to the Centre to provide medical oxygen saying the city is facing an acute shortage with most hospitals having oxygen left for only 8 to 24 hours.

“Serious oxygen crisis persists in Delhi. I again urge the Centre to urgently provide oxygen to Delhi. Some hospitals are left with just a few hours of oxygen,” the chief minister tweeted on Tuesday, the first day of the six-day lockdown.

The Centre, however, maintained in an affidavit to the Delhi high court and in the Prime Minister’s televised address on Tuesday evening that there was no shortage of oxygen.

A two-judge bench of Justices Vipin Sanghi and Rekha Palli rejected the Centre’s claim, which said there was no gap in oxygen supply to Delhi and that industrial use of oxygen was banned with effect from April 22, and suggested reduction in steel and petroleum production to divert oxygen to Covid-19 patients. It said economic interests cannot override human lives.

“Shortage is now. You have to do it (ban) now. Look into taking some oxygen from steel and petroleum industries. They have big pockets and big lobbies, but tell them if they have to cut production, then they can cut production. Lives have to be saved,” the bench said.

The court cited the example of a Central government counsel whose father was admitted in hospital and was on oxygen support, but due its scarcity, oxygen was being provided at a reduced pressure to him to conserve it. “Can you ask him to hold on till April 22?” the court asked. It said if nothing was done, then “we are heading for a bigger disaster”.

Deputy CM Manish Sisodia said on Tuesday many hospitals in Delhi have between 8 to 12 hours of oxygen stock left while some have stock left for 48 hours and sounded an alert. “Most of the Delhi hospitals have oxygen left for only 8 to 12 hours. We have been demanding an increase in the oxygen supply quota for Delhi for the past one week which the Centre has to do. If adequate oxygen is not supplied to hospitals by tomorrow morning, an outcry will be created,” Mr Sisodia tweeted.

He attached a list of Delhi’s 18 private and government hospitals with the oxygen supply they had left. LNJP had 12 hours of oxygen left, Ganga Ram 16-18 hours, Max Patpargunj, 8-10 hours.

Ganga Ram has 485 Covid beds, of which 475 are occupied. Around 120 patients are currently in the ICU. Its chairman Dr D.S. Rana said, “6,000 cubic meters of it is left, which at the rate of current consumption will last till 1 am. Need urgent replenishment.”

Mr Kejriwal, who is in isolation after his wife tested positive for coronavirus on Tuesday, had on Sunday termed the shortage of oxygen for coronavirus patients an “emergency”. He also wrote to Union minister of commerce and industries Piyush Goyal, seeking his intervention in the matter.

But on Tuesday the Union ministry of health, represented by additional solicitor general Chetan Sharma, told the Delhi high court that there has been an inordinate increase of 133 per cent in the projected medical oxygen required in Delhi as on April 20 — from the initial estimate of 300 metric tonnes, it’s gone up to 700 metric tonnes.

The ministry said all the states, including Delhi, have to rationalise the use of oxygen and prohibit abnormal usage and administering oxygen to the patients who do not clinically require the same.

“States have to undertake oxygen consumption monitoring in hospitals including private hospitals and to undertake facility-wise/hospital-wise oxygen inventory mapping and advance planning for timely replenishment so that supply can be efficiently managed,” it submitted.

The court asked the Centre whether oxygen supplied to industries can be diverted for Covid-19 patients, saying, “Industries can wait. Patients cannot. Human lives are at stake… If the lockdown continues then everything would come to a halt and therefore, what would be the need for steel, petrol and diesel during such a situation.”

“We might end up losing nearly a crore of people. Are we willing to accept that,” the bench said. It also suggested increasing Covid beds in hospitals which have their own oxygen generating capacity.