The AIMPLB on Sunday said that SC verdict was 'self-contradictory' and that they would file a review petition. 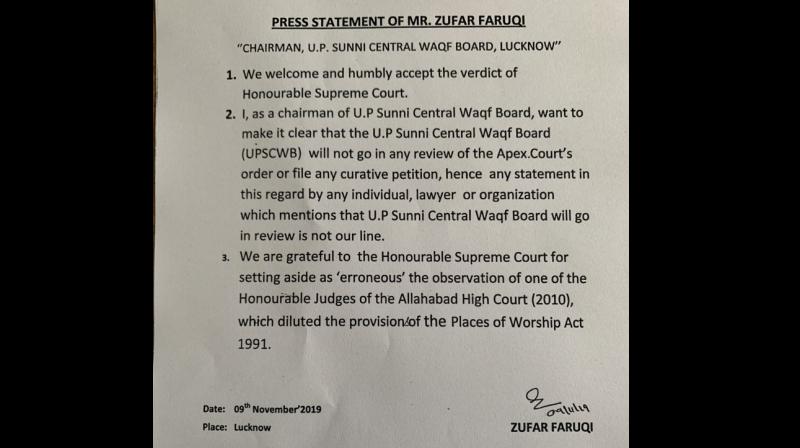 ''We had said on November 9 when the verdict was announced that we will accept the court decision. We are not going with AIMPLB on this issue,'' Faruqi, chairman of the Sunni Waqf Board said. (Photo : Twitter | @ZufarFaruqi)

New Delhi: The Sunni Waqf Board has made it clear that it wants to stay away from All India Muslim Personal Law Board (AIMPLB)'s decision on the filing of a review petition on the Supreme Court (SC) verdict of the Ayodhya title suit.

Zufar Faruqi, chairman of the board, said that the waqf board would not file any review petition, news agency IANS reported.

''We had said on November 9 when the verdict was announced that we will accept the court decision. We are not going with AIMPLB on this issue,'' Faruqi said.

Faruqi further said that it is not clear to him why the AIMPLB was going in for a review petition.

"We had always said that we would accept the decision of the Supreme Court and we are following our stand,'' he said.

The AIMPLB on Sunday had said that the SC verdict was 'self-contradictory' and that they would file a review petition.

The parties who are going in for the review petition together are Haji Mehboob, Maulana Hizbullah and the two sons of late Haji Abdul Ahad (one of the first Muslim litigants), Haji Asad Ahmad and Hafiz Rizwan.

The Jamiat Ulama-i-Hind, another party to the dispute said it would file a review petition separately.