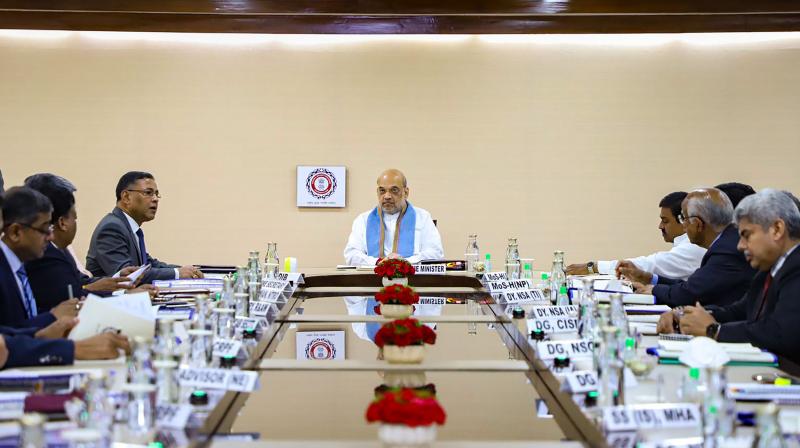 Guwahati: The ministry of home affairs has directed Director-General of Police of states adjoining the international border to keep a close watch on the demographic changes occurring in the bordering areas.

Sources said that the National Security Strategies Conference, which concluded on Thursday in New Delhi, had deliberated at length on demographic changes and increasing fundamentalist activities in bordering areas.

Pointing out that Union home minister Amit Shah had asked states to give top priority to the issues related to national security, security sources said that DGPs were directed to utilise 5G technology to strengthen the security apparatus.

Stating that for the first time the country had developed a system in the form of National Automated Fingerprint Identification System (NAFIS), sources said that state police heads had been directed to ensure that its utility must percolate down the line.

Amit Shah who also addressed the conference said, “On the internal security front, we had been successful in containing three perennial problems, terrorism in Jammu and Kashmir, various Under Ground groups in northeast and left wing extremism.  Under the leadership of Prime Minister Narendra Modi, we have enacted new laws, improved coordination with states, enhanced budgetary allocation and ensured maximum use of technology.”

He reiterated that it was the responsibility of the DGsP to ensure that all information of technological and strategic importance was percolated down the line, particularly in the bordering districts.

The union home minister also pointed out that his government had been making consistent efforts to bring improvement in the DGP Conference. “An analysis of this has revealed that we have been successful in finding solutions to various problems,” he added.

Laying stress on anti-drug campaigns across the country, Mr Shah said, “Seizure of the consignment is not enough. We must strive to annihilate the entire drug-network and to reach its source and destination is important.”

Asserting that for the first time in the country, work had been initiated on several fronts with a scientific approach, the union home minister said, “We must utilise 5G technology to strengthen the security apparatus.”

He said, “The fundamental principle of modern intelligence should not be ‘need to know’ but it should be ‘need to share’ and ‘duty to share’ because unless we change our approach, we would not be able to attain success.”

Stating that this conference would help in making young officers aware about issues pertaining to national security, security sources said that in two days long conference they also deliberated at length on---crypto currency, counter drone technology, watch on cyber and social media, security of ports and islands, emerging challenges of 5G technologies and smuggling of narcotics.

The annual conference was also attended by MoS home Ajay Kumar Mishra and Nishith Pramanik, heads of Central Agencies, CAPFs, CPOs and DGPs of all the states.