Kovind said, 'In this Lok Sabha elections, more than 61 crore citizens cast their vote and set a new record.' 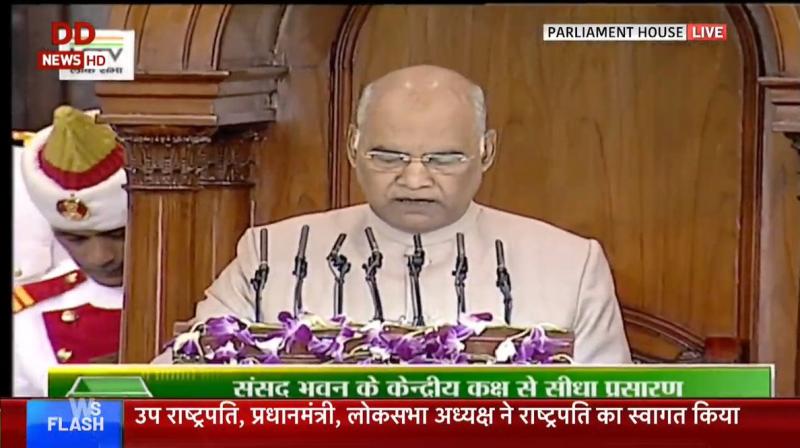 He also congratulated Om Birla on his election as the speaker of the Lok Sabha. (Photo: ANI | Twitter)

New Delhi: President Ram Nath Kovind on Thursday began his address of the joint session of both the Houses at the Parliament.

Addressing the Parliament, he said, “In this Lok Sabha elections, more than 61 crore citizens cast their vote and set a new record. The people of India gave a clear mandate. The government is working for 'Sabka Saath, Sabka Vikas'.”

President Kovind said the public has given a clear mandate in the 2019 Lok Sabha elections. “In the last 5 years, citizens were convinced the government is for them,” he said.

He also said that the Narendra Modi government is moving ahead to create a strong, secure and inclusive India. In his address to the joint sitting of both houses of Parliament in the historic Central Hall, the President noted that women came out in large numbers to exercise their franchise in the general elections.

A record 78 women have been elected as members of the Lok Sabha -- the highest ever -- and almost half of the elected members are first timers, Kovind said in his customary address after the formation of the 17th Lok Sabha.

President said, “One of the biggest challenges of 21st century is water crisis. Climate change and global warming will lead to worsening of this problem. The new ministry of Jal Shakti is a step in this direction.”

Elaborating on steps being taken in the education sector, he said, "My government is working to increase seats in higher educational institutes by 50 per cent by 2024 and will create 2 crore more seats."

The President said 26 lakh poor patients have benefitted from the Ayushman Bharat scheme and 1.5 wellness centres are likely to function by 2022. "My government is giving residential, health facilities to poor as poverty can be removed only by empowering them," he said.

“The scholarship amount for children of martyred soldiers from the National Defence Fund has been hiked. For the first time, children of slain state police personnel have been included in this scheme,” he added.

"My government will make its policy of zero tolerance towards corruption more expansive and effective," he said. Kovind said the government will build a transport system with emphasis on speed, security and environment and will also work to make rivers like Cauvery, Periyar, Mahanadi, Narmada and Godavari pollution free.

Kovind said that the work is underway on a large scale to develop the 112 ‘aspiration districts’ of the country.

He also congratulated Om Birla on his election as the speaker of the Lok Sabha.

The Rajya Sabha will begin its proceedings from Thursday after the address of the President.

The Parliament session will continue till July 26. The Economic Survey will be presented on July 4 followed by the Union Budget for 2019- 20 on July 5.