Rajnath talks tough, says talks with Pak only on PoK

New Delhi will only focus on getting PoK vacated by Pakistan during any talks in the future. O 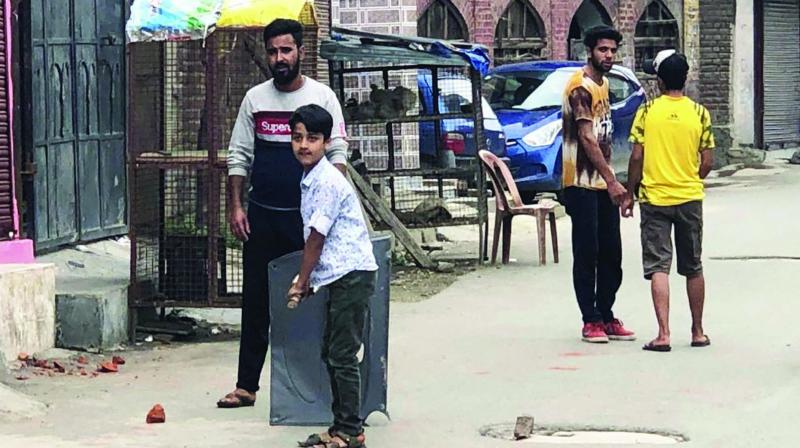 Youngsters play cricket in Srinagar on Sunday. Restrictions were further eased in 50 police station areas of the Valley on Sunday though curbs were tightened in some parts of Srinagar after stray incidents of violence. (Photo: PTI)

New Delhi/Kalka (Haryana): Defence minister Rajnath Singh declared on Sunday that if talks are held with Pakistan, they will be only on Pakistan-occupied Kashmir (PoK), even as Pakistan Prime Minister continued to carry out a vicious tirade against India, comparing it to Nazi Germany in a series of ludicrous tweets. While Pakistan’s founding fathers had themselves rejected Nehru and Gandhiji’s vision of a composite India in favour of the two-nation theory, the Pakistan PM claimed the BJP-led Government was a threat to the fabric of “Nehru and Gandhi’s India”. While trying to spread a scare, the Pakistan PM conveniently forgot to mention his own country’s track record of sponsoring terrorism, including sheltering terrorist Laden for many years and carrying out of brazen cross-border terror strikes in the past nearly three decades against India.

The Union defence minister was addressing a public rally in Haryana ahead of flagging off the BJP’s Jan Ashirwad Yatra for the forthcoming Assembly polls. Under the Simla Agreement of 1972, both India and Pakistan had agreed that talks on the Kashmir issue would be bilateral.

“If talks take place (with Pakistan), it will be on PoK (Pakistan occupied Kashmir) and not on any other issue. If at all there have to be any talks with Pakistan they will only happen when it stops aiding and abetting terrorism,” Mr Singh said. This makes it clear that New Delhi will not discuss the Kashmir issue as a whole with Pakistan, even bilaterally, even if the two countries were to initiate a dialogue sometime in the future.

New Delhi will only focus on getting PoK vacated by Pakistan during any talks in the future. On India bifurcating its state of Jammu and Kashmir (J&K) and revoking Article 370 of the Indian Constitution, Mr Singh said the decisions had sent jitters to Pakistan and had become a cause of concern for them. “Now it (Pakistan) is knocking every door and approaching various countries for help. Have we committed any crime? And they are trying to threaten us. However, America, perceived as the most powerful country in the world by people, has snubbed Pakistan, telling them to initiate a dialogue with India,” he said.

Meanwhile, Pakistan Prime Minister Imran Khan continued to run a vicious campaign against India. In a series of vitriolic tweets, Mr Khan claimed, “India has been captured, as Germany had been captured by Nazis, by a fascist, racist Hindu Supremacist ideology and leadership. This threatens nine million Kashmiris under siege  ... (in Kashmir) for over two weeks which should have sent alarm bells ringing across the world ... .”

Trying in vain to paint an alarmist picture and indulging in propaganda, the Pakistan PM added, “And the threat also extends to Pakistan, the minorities in India and in fact the very fabric of Nehru and Gandhi’s India. One can simply Google to understand the link between the Nazi ideology and ethnic cleansing and genocide ideology of the RSS-BJP Founding Fathers.”

Attempting to raise a scare on the nuclear issue, the Pakistan PM claimed, “The World must also seriously consider the safety and security of India’s nuclear arsenal ... .”