The visit also took place about two years since the military stand-off between the Indian and Chinese armies at Doklam in Bhutanese territory. 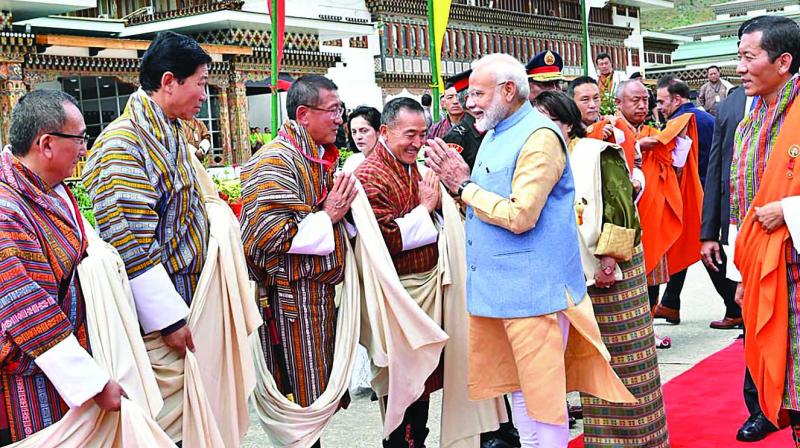 Prime Minister Narendra Modi is welcomed on his arrival at Paro Airport in Bhutan on Saturday. (Photo: PTI)

New Delhi: India and Bhutan on Sunday “reaffirmed their commitment to maintain close coordination on matters affecting each others’ security and national interests”, even as Prime Minister Narendra Modi concluded his two-day visit to the Himalayan neighbour.

A joint statement issued by the two sides said that while Mr Modi and Bhutan Prime Minister Dr Lotay Tshering jointly inaugurated the Ground Earth Station of the South Asian Satellite in Thimphu, constructed with the support of the Indian Space Research Organisation (ISRO), the two leaders “also agreed to collaborate on the joint development of a small satellite for Bhutan”.

The two leaders also “directed that a Joint Working Group (JWG) be formed to implement the project and other related activities, including developing a geoportal system for Bhutan for natural resources and disaster management, using remote sensing and geo-spatial data”.

This comes at a time when China has been keen to strengthen ties with Bhutan.

The visit also took place about two years since the military stand-off between the Indian and Chinese armies at Doklam in Bhutanese territory. The issue had then been eventually resolved mutually between India and China after several weeks but it reinforced the strategic importance of Bhutan for India. India continues to have very close strategic ties with Bhutan.

“Both sides reaffirmed their shared security interests and reiterated their commitment to maintain close co-ordination on matters affecting each other’s security and national interests,” a joint statement released by India and Bhutan said, at the conclusion of PM Modi’s visit.

PM Modi on Sunday addressed the students of the prestigious Royal University of Bhutan where he encouraged the “brightest” Bhutanese yo-uth to work hard and take the Himalayan nati-on to great heights. “For every challenge, we have young minds to find innovative solutions to overcome them. Let no limitation constrain you,” Mr Modi was quoted by news agencies from Thimpu.