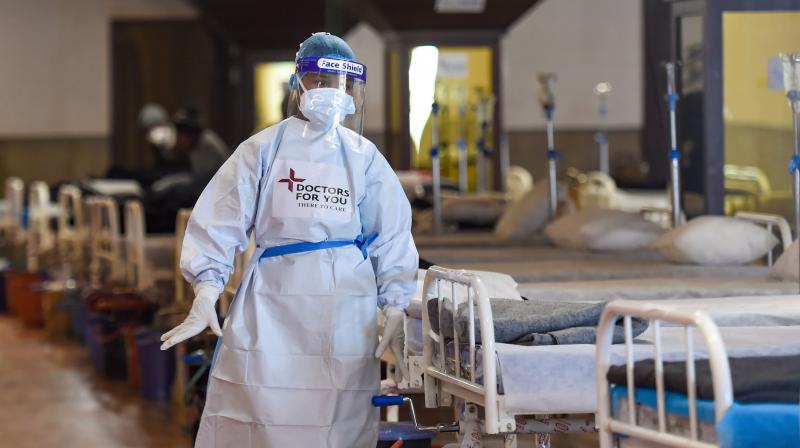 New Delhi: Noting there has been a decline in Covid-19 testing in many states and Union territories, the Union health ministry has urged them to speed up the pace of testing “in a strategic manner” to keep effective track on the spread of the pandemic for immediate citizen-centric action. It said that the progression of disease to a severe category can be averted by strategic testing of those who are at high risk and more vulnerable, as well as in areas where the spread is likely to be higher.

The ministry has also issued an updated set of guidelines for the care of Covid-19 treatment, in which it has urged doctors to avoid the use of steroids and to test patients for tuberculosis if severe coughing persists. The guidelines said the use of steroids increases the risk of secondary infections, such a black fungus, and must thus be avoided.

In a letter to states/UTs, health ministry additional secretary Arti Ahuja highlighted that Omicron, designated by the World Health Organisation as a “variant of concern”, was currently spreading across the country. As many as 2,38,018 fresh Covid-19 cases, driven by the Omicron variant, and 310 deaths were reported across the country in the last 24 hours. The Omicron count across 29 states/UTs has gone above 9,000. The positivity rate has, however, fallen to 14.43 per cent from 19.65 per cent.

Mumbai, however, has seen a marginal rise in the number of infections. The country’s financial capital logged 6,149 fresh cases, 193 more than Monday, and seven deaths. The number of active cases in Mumbai now stands at 44,084.

India has a capacity to carry out about 25 lakh Covid-19 tests a day. The maximum tests carried out in a single day in the third wave has been about 16 lakhs. Referring to the health ministry’s earlier letters and the home ministry’s advisory of December 27 last year laying out the broad framework of pandemic management in the context of Omicron, Ms Ahuja told the states/UTs that testing was a key and crucial component. “However, it is seen from the data available on the ICMR portal that testing has declined in many states and Union territories.”

Ms Ahuja said in all advisories on testing issued by the Indian Council of Medical Research (ICMR), including the latest on January 10, the basic objective remains early detection of cases for quick isolation and care. In addition, testing remains a key strategy for pandemic management as it helps in identification of new clusters and new hotspots of infection that can in turn facilitate immediate action for containment such as setting up of containment zones, contact tracing, quarantining, isolation and follow-ups.

Reiterating the advisory on purposive testing strategy issued by ICMR on January 10, Ms Ahuja said in community settings all those who are symptomatic must be tested and all at-risk contacts of lab-confirmed cases must also be tested.

Ms Ahuja said this advisory must be read in conjunction with the earlier guidelines and advisories wherein it was recommended that strategic and focused testing should be done of people who are vulnerable, living in closed surroundings, in densely populated areas in emerging new clusters and new hotspots of positive cases.

In the revised set of guidelines, the ministry has also advised Covid-19 patients to go for tests for tuberculosis and other conditions if cough persists for more than two or three weeks. According to the guidance note, upper respiratory tract symptoms without shortness of breath or hypoxia has been categorised as mild disease and patients have been advised home isolation and care. Those suffering from mild Covid should seek medical attention if they have difficulty in breathing, high grade fever, or severe cough lasting for more than five days.

The guidelines said those having breathlessness with SpO2 fluctuating between 90-93 per cent can get admitted to a ward, and they will be considered moderate cases. “Such patients should be given oxygen support and awake proning should be encouraged in all patients who require supplemental oxygen therapy, in sequential position changes every two hours… Respiratory rate over 30 per minute, breathlessness or SpO2 lower than 90 per cent on room air should be considered as severe disease and such patients have to admitted to an ICU as they will need respiratory support.”