Pakistan has launched an all-out campaign from all its embassies against New Delhi and knocked every door for help. 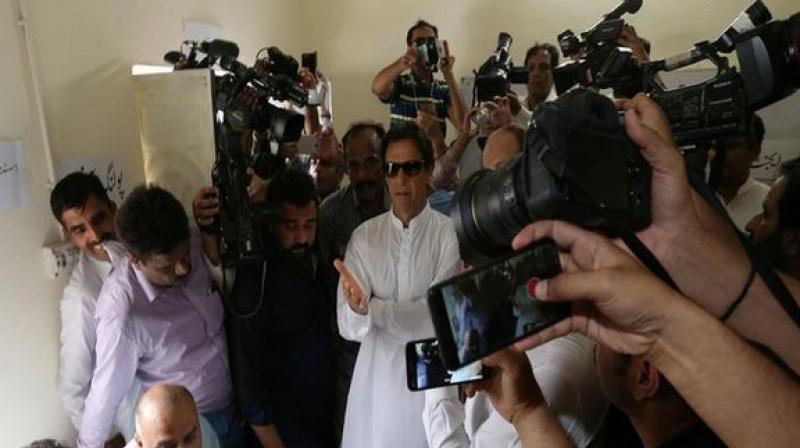 At the end of the meeting on Friday, China and Pakistan stood isolated as member after member refused to endorse their position. (Photo: ANI)

New Delhi: It's been 12 days since India announced its decision to reorganise the constitutional status of Jammu and Kashmir, ever since then Pakistan has ramped up its rhetoric against New Delhi and is endlessly trying to internationalise the strictly internal Indian matter of Jammu and Kashmir.

India's action has rattled Islamabad so much so that it hurriedly sent its foreign minister Shah Mehmood Qureshi to China to seek its help at the United Nations Security Council and use the Asian giant's bully pulpit in the region.

Pakistan has launched an all-out campaign from all its embassies against New Delhi and knocked every door for help. Pakistan Prime Minister Imran Khan has abandoned all domestic policy reforms that he promised at the time of elections to improve the dire condition of the country's economy and begun on virulent attacks against Prime Minister Narendra Modi and the BJP.

However, so far, Islamabad's panic calls have failed to mark its way to the international community. In an effort to bring the matter to United Nations Security Council, Pakistan wrote twice to the body, urging it to begin emergency meeting on the issue. After failing to do so, Pakistan sought China's help. Even at the UNSC, it had to bite dust.

At the end of the meeting on Friday, China and Pakistan stood isolated as member after member refused to endorse their position.

Moreover, international media has not taken Pakistan's media outreach seriously. Despite being flooded with updated photographs and dodgy video testimonies, by and large the international media is sceptical of Pakistan's charges of human rights violations by India in Jammu and Kashmir. Islamabad's own track road in human right violations in Baluchistan and the fact that it sponsors terrorism in Afghanistan and India is not a secret. Recently Imran Khan himself admitted in the US to a journalist that his country has 30,000-40,000 terrorists.

"The Pakistan army's own shabby treatment of journalists, opposition leaders and ethnic movements representing the minority Baluch and Pashtuns, makes it hard for Islamabad to argue that Kashmiris will be better off in Pakistan," wrote Journalist Sadanand Dhume in an article published in the Wall Street Journal.

Pakistan has a long-held policy to create unrest and tensions in neighbouring countries especially in India and Afghanistan by backing jihadist groups. Except China which has a transactional relationship with Pakistan, no country with significant clout has come forward to support Pakistan.

"Pakistan, which has long made Kashmir a central plank of its foreign policy, lacks the wherewithal to force India's hand. By backing jihadist groups in India and Afghanistan and neglecting its economy, Islamabad has ensured that it lacks the stature to make India take its views on board," Dhume added.

"As Pakistan marks its independence day next week, it increasingly feels like a nation with its back against the wall, with few options to protect its existential interests. Its economy is teetering on the brink of collapse, and its international allies have either stayed silent over Kashmir or defected in support of India," Maria wrote.

Four out of five permanent members in the United Nations did not support the Pakistan contentions over India's decision. A recent example is Imran Khan failing to get the support of the United States despite his highly publicised visit last month to Washington DC where he supposedly struck a friendship with President Trump. During a phone conversation last week with Khan, Trump made it clear that Kashmir issue should be resolved through a bilateral dialogue between India and Pakistan.

Russia became the first UNSC member to support India. It said India's action to remove Article 370 its internal matter and was under the constitutional framework.

"When Pakistan agreed after the September 11, 2001 attacks to help the United States fight terrorist groups, it asked for a favor in return --American help mediating on Kashmir and pressing India to make concessions. When the United States refused, Pakistan felt betrayed. Just last month Pakistanis felt more upbeat about their country's prospects. Mr. Khan had returned from a visit to the White House where he met with Mr. Trump, who promised to intervene on Kashmir. But India's swift action days later to strip Kashmir of its autonomy plunged Pakistan back into isolation," Maria wrote in an article.

Adding to its woes, Islamabad was not able to convince even the Muslim world to back it in raising the issue of Kashmir. Two of the OIC member states, Maldives and UAE said Kashmir is an internal matter of India

"The biggest blow came from the influential United Arab Emirates, which stated that Kashmir was an internal matter for India, withdrawing any support to raise the issue internationally," Maria added.

American diplomat Richard N. Mass is of the view that even after facing defeat in multiple forums Pakistan will continue to sponsor terrorism.

"There is a possibility that Pakistan will respond by renewing its support for terrorism, which could lead to another war between Pakistan and India, two nuclear-armed countries. Against this backdrop, the US would be unwise to turn to Pakistan as a strategic partner. Pakistan sees a friendly government in Kabul as vital to its security and competition with arch-rival India. There is little reason to believe that the military and intelligence services, which continue to run Pakistan, will rein in the Taliban or rule out terrorism," he wrote in Project Syndicate.

Ever since India announced its decision to do away with Article 370, Islamabad has escalated its virulent tactics against New Delhi and tried to involve the international community in the matter.

Pakistan has alleged that India's decision of revoking the provisions under Article 370 will not only threaten the regional peace but also the world peace. However other than a few op-ed articles in a few publications in London, international media is not buying into Islamabad's propagandist claims.