While over 1.91 lakh healthcare and frontline workers were vaccinated on the day one, only 17,072 received their jabs in 6 states on Sunday 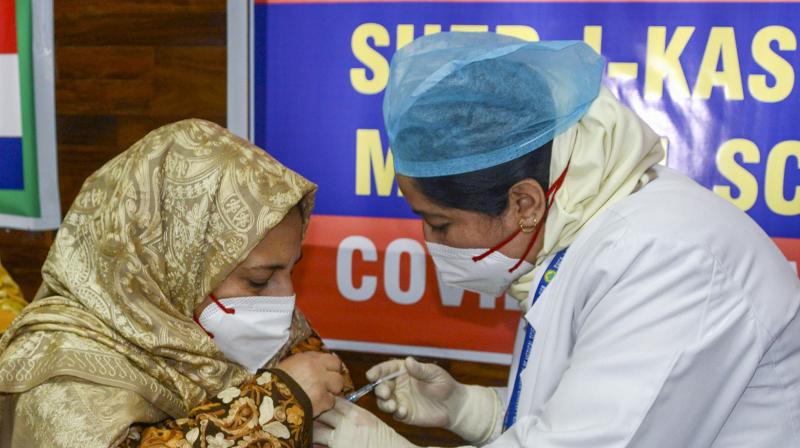 Of all 2.24 lakh people who have been vaccinated, 447 developed minor complications. Only three persons who were hospitalised have now been discharged. (Photo:PTI)

New Delhi: As the Covid-19 vaccination drive entered the second day, India for the first time reported Sunday that its share of active cases within the total number of infections has shrunk below two per cent. Of the 2,08,826 positive cases reported in the country, the number of active cases had now gone below 1.98 per cent.

While over 1.91 lakh healthcare and frontline workers were vaccinated on the first day, only 17,072 received their jabs in six states on Sunday. The states and UTs have fixed specific days for vaccinations.

Of all 2.24 lakh people who have been vaccinated, 447 developed minor complications. Only three persons who were hospitalised have now been discharged.

India is the only nation in the world, including the United States, Britain and France, to have vaccinated the highest number of people on the first day of the immunisation drive. It is also the only country in the world which started a mass vaccination drive at a time when its infection rate is on the decline. In contrast, in European nations where the vaccination drive started before India, there has been a steep rise in the number of viral infections, posing a serious challenge to their medical facilities.

A day after India took its first steps out of the pandemic with shots of the Covishield and Covaxin vaccines, the Congress Party on Sunday hit out at the Centre, asking why didn’t Prime Minister Narendra Modi and his ministers take vaccine shots. Congress spokesman Randeep Surjewala also asked the government if people below the poverty line will get free coronavirus vaccines. He raised questions over the price of Covishield and Covaxin doses, and the Centre’s decision to allow the export of one of the vaccines before immunising everyone in the country.

In Delhi, where 4,319 healthcare and frontline workers were vaccinated on Saturday, health minister Satyendar Jain said there were 51 cases of minor complications. He said there was one “serious adverse” case, in which the patient was admitted to the All-India Institute of Medical Sciences. The vaccine recipient has, however, been discharged and his vitals are said to be stable.

Bharat Biotech’s Covaxin, which is yet to submit its Phase 3 trial efficacy report, was administered in 161 session in Gujarat, 28 sessions in Himachal Pradesh, 41 in Jammu and Kashmir, 48 in Jharkhand and 133 in Kerala, two in Ladakh, one in Lakshadweep, 150 in Madhya Pradesh, 10 each in Manipur and Meghalaya, five in Mizoram, nine in Nagaland, eight in Puducherry, 59 in Punjab, two in Sikkim, 18 in Tripura, 34 in Uttarakhand and 183 in West Bengal.