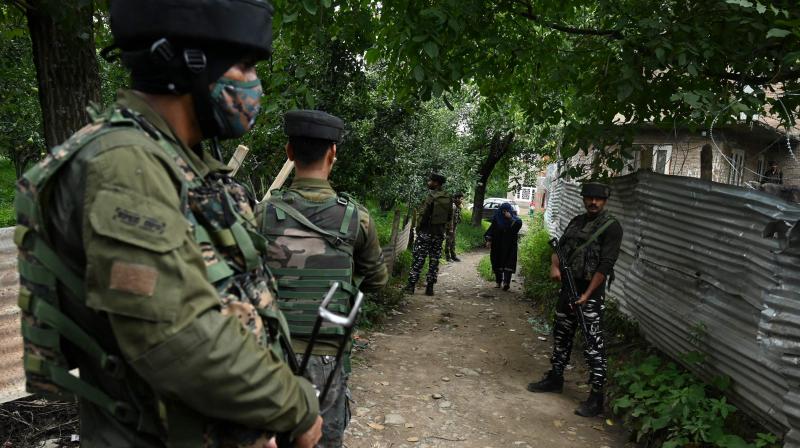 Security forces guards stand guard near the house of Sunil Kumar, who belonged to the Kashmiri Pandit community, after suspected militants shot him dead at an apple orchard in Chotipora area of Shopian. (Photo by TAUSEEF MUSTAFA / AFP)

SRINAGAR: Contrary to the government claim that a safe environment has been created for the minority communities in the Kashmir Valley, separatist militants on Tuesday shot at and critically wounded two Kashmir Pandit cousins in an apple orchard in southern Shopian district.

The injured Sunil Kumar Bhat and Pitambar Nath Bhat were evacuated to the hospital where the former was declared dead. Pitambar Nath alias Pintu is being treated at a military hospital in capital Srinagar. The police said his condition is ‘stable’

The police said that the duo was fired upon by terrorists in an apple orchard in Chotigam area early Tuesday. A statement issued by it here said, “Preliminary investigation revealed that terrorists fired upon two civilians in an apple orchard at Chotipora area of Shopian. In this terror crime incident, two civilians Pitambar Nath Bhat, son of Arjun Nath Bhat, and Sunil Kumar Bhat, son of Sri Ji Bhat received critical gunshot injuries. Both injured were immediately shifted to hospital where one of them Sunil Kumar succumbed to his injuries. However, the condition of other injured person is stated to be stable”.

The police and local sources said that the duo was working in their family apple orchard when a group of gunmen surfaced. They were asked to disclose their names by it and when they did a shower of bullets from an AK-47 pierced their bodies. The sources added that Sunil Kumar had died on the spot while his brother was lying in a pool of blood as a group of villagers rushed to the spot. The assailants had fled after committing the crime.

The sources said that the Bhats chose to stay put when a vast majority of Kashmiri Pandits fled their hearth and home in the Valley to escape violence after the separatist campaign burst into a major insurgency in 1989-90 and were living peacefully with their Muslim neighbours. However, a member of the Bhat family was targeted by suspected militants a couple of months and, as was alleged by it, the government did nothing to ensure the safety of the others.

This is the second such attack on a minority community in the last 24 hours in the Valley. On Monday evening, suspected militants exploded a hand grenade at Gopalpora in Chadoora area of central district of Budgam, injuring one Karan Kumar Singh. He was admitted to a Srinagar hospital where his condition is stated to be ‘stable’.

Lieutenant Governor, Manoj Sinha, said he was distressed to learn about the attack on the brother duo in Shopian. He tweeted, “Pained beyond words on despicable terror attack on civilians in Shopian. My thoughts are with the family of Sunil Kumar. Praying for speedy recovery of injured”. He said that the attack deserved strongest condemnation from everyone and promised, “Terrorists responsible for barbaric act will not be spared”.

Former chief minister and People’s Democratic Party (PDP) president, Mehbooba Mufti, also took to the microblogging site to condemn the attack. She said, “Terribly sorry to hear about the targeted killing in Shopian. Condolences to the deceased’s family”. She accused the central government of turning a blind eye on such unabated incidents. She said, “GOI continues to behave like an ostrich with its head buried deep under the sand. Every resident of J&K has become cannon fodder in Delhi’s quest for ‘manufactured normalcy”.

National Conference (NC) leader and former chief minister, Omar Abdullah, tweeted, “Terribly sad news from South Kashmir today. An accident & a militant attack have left a trail of death & suffering. I condemn the militant attack in Shopian unequivocally in which Sunil Kumar was killed & Pinto Kumar injured. My condolences to the family”.

The latest incidents are reminiscent of a series of such and similar attacks carried out by suspected militants in Srinagar and some other parts of the Kashmir Valley in September-October last year and also earlier this year, leaving several people including seasonal labourers -both Hindus and Muslims- from mainland India dead or injured.

On May 12, Rahul Bhat, a Kashmiri Pandit government employee, was shot dead by gunmen in Chadoora town, evoking widespread condemnation and a wave of protests by the government employees belonging to the minority community working in the Valley under the Prime Minister’s special job package rolled out in 2008-09 for the return and rehabilitation of Kashmiri Pandits to the Valley.

Bhat’s murder was following by that of a Muslim TV artist Amreen Bhat in the same area on May 12.

On August 12, a 19-year-old seasonal labourer from Bihar Muhammad Amrez, was shot and critically wounded by suspected militants at his rented accommodation at Soadnara in the Valley’s northern Bandipore district. He died in hospital early the next day.

On August 4, a seasonal textile worker -also from Bihar- Muhammad Mumtaz was killed and two others Muhammad Arif and Muhammad Maqbool were injured in a grenade attack by suspected militants in Gadoora village of southern Pulwama district.

On June 2, Dilkhush Kumar, a resident of Arnia district of Bihar, was killed and his co-worker from Punjab Rajan Kumar was injured in a militant attack in Kulgam.

The same day, Vijay Kumar, acting head of the local branch of the Ellaquai Dehati Bank, a rural bank sponsored by the State Bank of India, was targeted by a sole gunman inside its premises at Arreh Mohanpora in Kulgam, resulting in his on-the-spot death.

On May 13, an off-duty policeman Reyaz Ahmad was killed by suspected militants inside his house in Pulwama’s Gudoora village. His murder was followed by the killing of two other off-duty policemen Ghulam Hassan Dar and Saifulla Qadri in two different areas of Srinagar.

On May 31, Rajni Bala, a 36-year-old teacher, was shot dead by suspected militants outside her school in Kulgam. She was the second schoolteacher from the Jammu region and belonging to the Scheduled Caste category who fell to assassins’ bullets while working in the Valley.

The attacks on non-local labourers prompted a vast of such workforce to leave the Valley and return home prematurely in the last fall.

The J&K police had blamed most of these murders and other similar attacks on The Resistant Front (TRF) which, it insists, is an ‘off-shoot’ of proscribed Lashkar-e-Tayyaba (LeT) organisation and other outfits and said that most of the perpetrators of these crimes have been eliminated. It also claimed that a safe environment has been created for the minorities in the Valley by strengthening security in the areas they live or work.