Arya, who accompanied the court commission for the mosque survey, said that they have found a 'conclusive evidence' 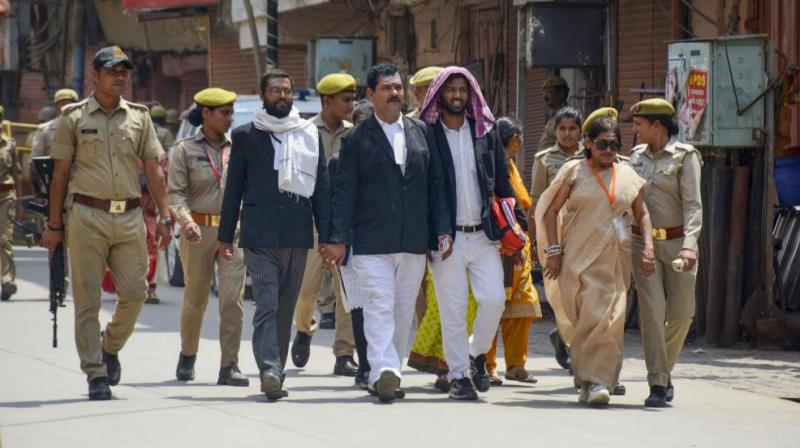 : Officials leave after a videographic survey at Gyanvapi Masjid complex, in Varanasi, Sunday, May 15, 2022. (PTI)

Varanasi: As the third day of the court-ordered videography survey of the Kashi Vishwanath Temple-Gyanvapi Mosque complex in Varanasi concluded on Monday, the Hindu petitioner in the case, Sohan Lal Arya claimed that the committee found a Shivling at the complex.

Arya, who accompanied the court commission for the mosque survey, said that they have found a "conclusive evidence".

"Shivling....Jiski Nandi pratiksha kar rahi thi... The moment things became clear the chants of 'Har Har Mahavdev' resonated in mosque premises," he claimed.
The survey was conducted in accordance with the Varanasi Civil Court's order to continue the survey despite objections from the mosque authorities.

After the conclusion of the survey, the Varanasi court ordered the District Magistrate of Varanasi, Kaushal Raj Sharma, "to seal the area where the Shivling was found and to bar people from going to the place."

In its order, the court said that the DM, police commissioner and the Central Reserve Police Force (CRPF) commandant Varanasi will be responsible for the security of the sealed area.

The civil court had appointed a court commissioner to conduct the survey and videography of the site and the same was challenged before Allahabad High Court, which dismissed the appeal on April 21. The April 21 order of the High Court was challenged in the apex court.

Five women had filed a petition in the court seeking permission for daily worship at the Shringar Gauri temple, which is claimed to be situated inside the Gyanvapi Mosque premises.

The order of the civil court for undertaking survey and videography at the premises was subsequently given by the court.

Another petition, which was filed by one Vijay Shankar Rastogi, had contended that the entire premises belonged to the Kashi Vishwanath Temple and that the Gyanvapi Mosque is only a part of the temple complex, is also pending in the court since 1991.

Rastogi had also claimed that the Kashi Vishwanath Temple had been built over two thousand years ago and the temple was demolished by the Mughal emperor Aurangzeb.

Advocate Vishal Singh, the Court-appointed special assistant commissioner, in Varanasi, said that the survey was conducted in an unhindered manner.

Commissioner of Police Varanasi, Satish Ganesh thanked the people of Kashi for their cooperation during the three-day survey, and said, "We spoke with all stakeholders and reached a consensus that it's important to follow court's order. We also cleared people's misconceptions and worked on confidence building. The three-day survey has ended."