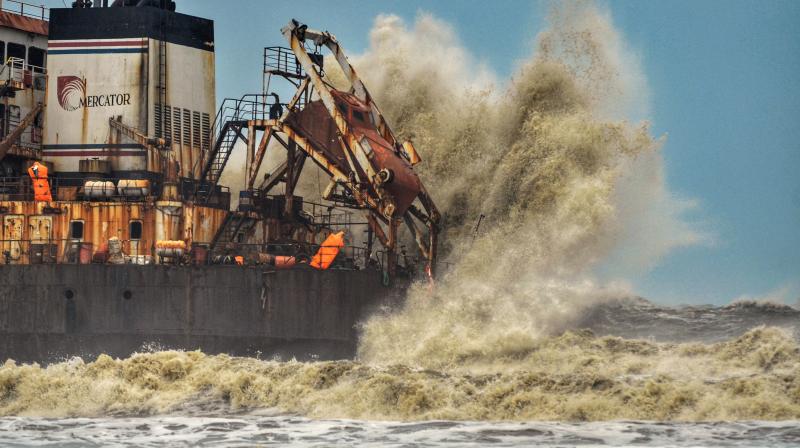 Union home minister Amit Shah on Sunday chaired a high-level meeting to discuss preparedness for Cyclone Tauktae, that is likely to hit states like Maharashtra, Gujarat, Kerala and Goa, among others. This was attended by the chief ministers of Maharashtra and Gujarat, among others, via video conferencing.

The India Metereological Department said Sunday evening that Cyclone Tauktae could cause heavy to very heavy rains at isolated places in north Konkan, Mumbai, Thane and Palghar in Maharashtra on Monday. It has predicted extremely heavy rainfall in Raigad on Monday.

The IMD has said while Mumbai was not in the direct line of the threat of the cyclone, as it passes through the sea near the Mumbai coast, its effect is likely to be accompanied by rain and strong winds. Mumbai had got light rain on Saturday night but not on Sunday despite the sky being mostly overcast.
The very severe cyclonic storm is likely to intensify in the next 24 hours and reach the Gujarat coast on Monday evening, the IMD said earlier. It is likely to cross the Gujarat coast with wind gusts of up to 175 kmph between Porbandar and Mahuva in Bhavnagar district in the early hours of Tuesday morning.

In New Delhi, the home minister asked states to ensure uninterrupted power supply, particularly in hospitals where patients are recovering in ICUs and wards. Mr Shah also said power supply to cold chains storing vaccines should not be hit. It was also decided that district magistrates should ensure oxygen supplies in their districts are not affected.

Sources said the home minister was particularly concerned that health services during the peak of the Covid-19 pandemic should not be affected in any manner. Adequate arrangements are being made to ensure that the supply of oxygen, medicines and transportation for critical patients to hospital should not be hampered during Cyclone Tauktae. The states were advised to take help from the National Disaster Response Force. NDRF teams have already been deployed in different states to ensure that makeshift facilities, specially where Covid patients are undergoing treatment, that may be hit by strong winds should be shifted to beds in properly built structures and hospitals.

To closely monitor the situation, a 24x7 control room has been set up in the home ministry so that immediate relief can be rushed to states which seek assistance. Mr Shah asked all chief ministers to seek aid, including Central forces’ reinforcements if needed, so that the “fight against the pandemic continues at a steady pace”.

Mumbai’s civic body, the Brihanmumbai Municipal Corporation, has cancelled all Covid vaccinations due on Monday in view of the IMD alert. The BMC on Saturday night shifted 580 patients from jumbo Covid facilities to state and civic-run hospitals in Mumbai. It also said that the revised vaccination schedule will be Tuesday, Wednesday and Thursday (May 18 to May 20). The BMC had already suspended the inoculation drive on May 15 and 16 to avoid trouble for people due to the heavy rain and windstorms ahead of Cyclone Tauktae.