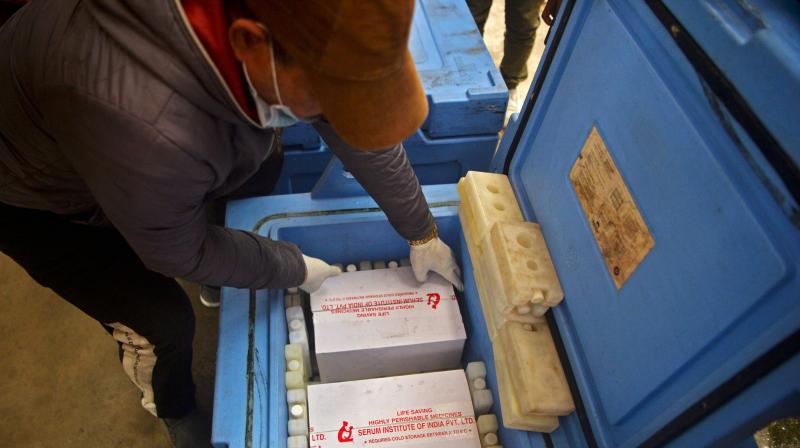 A health worker checks the boxes of Covishield vaccine at the North Bengal Medical College and Hospital in Siliguri on January 14, 2021. (AFP)

Burdwan/ Alipurduar: Several Trinamool Congress leaders, including two MLAs, were among the people who received the COVID-19 vaccine in West Bengal's Purba Bardhaman district on Saturday, while many healthcare workers alleged that they could not get the jab though they were asked to come for it.

District health officials said that these leaders are all associated with different hospitals as members of the Patients' Welfare Committees, making them eligible for the vaccination programme in the first round.

At Katwa Sub-divisional Hospital, local MLA Rabindranath Chatterjee of TMC was among the 34 people who received the vaccine on the first day.

The Centre is targetting to vaccinate three crore healthcare and frontline workers in the first phase for free. At a meeting with the chief ministers on Monday, Prime Minister Narendra Modi suggested that public representatives, a reference to politicians, should not be part of this initial exercise.

"This is my personal suggestion and no one should take it otherwise. We public representatives are not part of it," he had said.

Even as the TMC leaders received the vaccine on the first day, several healthcare workers in the district alleged that though they were asked to come for the jab, they could not get it.

A nurse at the Burdwan Medical College and Hospital said that she was asked to report for the vaccination by 9 am and though she arrived for it on time, she did not get the shot.

Some other nurses at the hospital, refusing to be identified, also levelled similar allegations.

The district's Chief Medical Officer of Health Pranab Roy said that the public representatives who received the vaccines are part of the Patients' Welfare Committees at different hospitals.

"Since they are associated with the hospitals to ensure good services, they are also eligible for the vaccine. There is nothing irregular in it," he said.

Senior TMC MP Saugata Roy said it would have been better had the party leaders not taken the vaccine.

"The TMC leaders and MLAs who got the vaccine are members of Patients' Welfare Committees of different hospitals. So, they got it. However, it would have been better had they not taken it today. These are isolated incidents. It would be wrong to blame the party," he said.

In the Alipurduar district, TMC MLA Saurabh Chakrbarty's name was on the top of the list for Covid vaccination. However, he claimed that he was unaware of it.

"I am not taking any vaccine now and I have informed the health department. First, the common people of Alipurduar should get the vaccine and then I will take the shot. I am not aware as I had not applied for any vaccination," Chakraborty said.