MP ‘miracle tree’ out of bounds for its ‘devotees’

Irate mob on Wednesday attacked policemen deployed in the village for regulating them, leaving 11 cops injured. 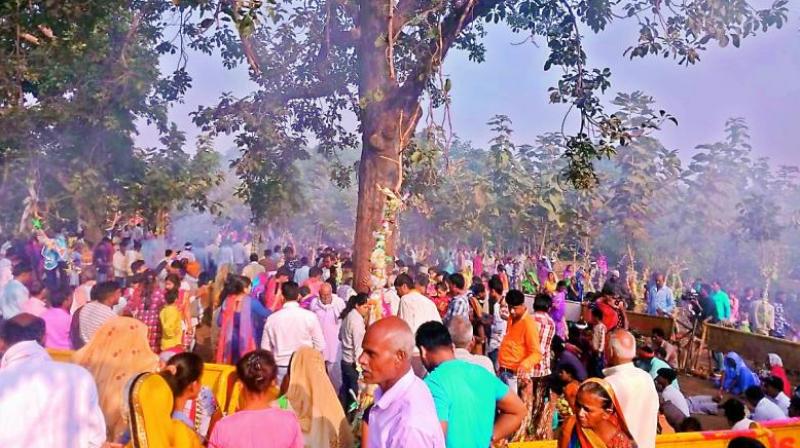 Bhopal: A day after a frenzied mob clashed with police for being denied to enter the buffer zone of Satpura Tiger Reserve  in Madhya Pradesh’s Hosangabad district to “embrace’’ a “Mahua’’ plant believing that it has healing power, local administration on Thursday imposed prohibitory orders under Section 144 in the area to bar the people from worshipping it.

Local administration imposed prohibitory orders in the forested village of Nayagaon, which had suddenly turned a pilgrim centre with people from surrounding areas pouring there to touch a “miracle tree’ to stop the people from approaching it.

“Section 144 was imposed in the area to stop the people from worshipping the tree”, sub-divisional officer  Lokesh Nirapure, who visited the spot along with local sub-divisional magistrate  and police officers to take stock of the situation, said.

The forest department along with the local administration has meanwhile launched a drive to create awareness among the locals that the tree has no healing power and vested interests have spread all kinds of rumours about it for commercial purposes.

“We have started mobilizing local youths to spread the message that the tree has no healing power”, he added.  Irate mob on Wednesday attacked policemen deployed in the village for regulating them, leaving 11 cops injured.

The local administration has simultaneously launched a drive to make the buffer zone, where shops and small commercial establishments came up in no time with the tree drawing people from far off places every day, free of all kinds of encroachments.

Around 600 shops selling ‘puja’ materials, including coconuts and over 100 tea and roadside eateries had come up in the particular place to cater to the needs of the ‘pilgrims’ flooding the spot.

Even, terminally ill patients were discharged from hospitals and carried to the tree by their kin with the hope of curing them. Irate mob on Wednesday attacked policemen deployed in the village for regulating them, leaving 11 cops injured.