The Opposition is not happy with the state government’s decision. 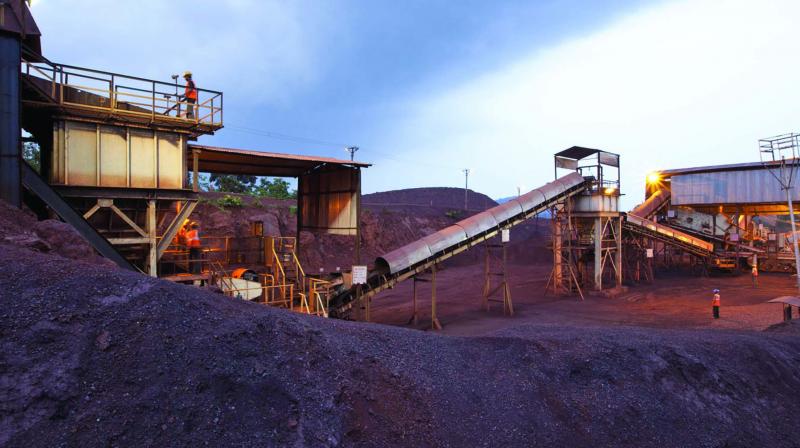 An iron ore mine in Odisha.

BHUBANESWAR: Odisha, the largest producer of iron ore in the country, is planning to earn huge revenues from the auction of mines. The mine auction exercise, the state government hopes, would fetch it several thousand crore rupees over a period of time and help finance some its own ongoing social sector programmes that have proved high-yielding electoral tools.

The Opposition, however, is not happy with the state government’s decision saying the latter must think some out-of-box solutions to augment its resources instead of exhausting the precious mineral wealth.

In the first phase, the state government has invited financial and technical bids to grant mining leases (ML) for 10 iron ore and manganese blocks.

The Union government had recently approved the revision in mining lease area limits for iron ore and associated minerals in Odisha to 58 square kilometres (sq km), up from 10 sq km prescribed in Section 6 (1) (b) of the Mines and Minerals-Development & Regulation (MMDR) Act.

In fact, the state had kept the auctions of iron and manganese ore in abeyance for want of clearance from the Centre.

Sources in the state mines department said seven of the mineral blocks on offer are pure iron ore deposits. The remaining three have iron ore and manganese ore reserves.

Similarly, five out of the 10 enlisted blocks have been reserved for specified end use--Thakurani, Jaribahal, Roida-II, Narayanposhi and Ganua. The specified end use is still hazy as it is unclear how many blocks would be made available for large, integrated steel manufacturers and secondary steel producers like sponge iron, pellet and pig iron makers.

Since the state government has already decided to include secondary steel plants as specified end use, online auctions of iron ore are expected to elicit intense bidding.

Auctions are to be hosted on MSTC’s online platform. The state government has invited financial and technical bids both in physical and digital formats. The deadline for purchase of tender documents is November 15. Bidders can submit their bids up to November 18, a notification by Odisha’s steel and mines department said.

In the next phase, the state is expected to float notice inviting tenders and model tender documents for 10 more blocks.

Though specific figures on expected revenue earning from the proposed auction process is not available, sources informed that it would receive huge sums that would be enough to fund state housing, healthcare, primary education and infrastructure development projects.

The Opposition BJP and Congress have been complaining about the state’s failure in funding Centrally sponsored programme and special vehicle projects like 289-km Khurda-Balangir railway line.

The Odisha government is yet to hand over around 3,000 acres of land to the Railways for the ongoing Khurda-Balangir railway line project. Most of these land patches are private and forest land which the state government has failed to acquire and hand over to the Railways.

The state government has sanctioned `159 crore only towards land acquisition compensation for Dasapalla-Balangir segment.

According to analysts, once the mining revenue starts flowing into the state coffers, it can make higher budgetary allocation for projects like Khurda-Balangir railway and expand size of the food security, healthcare and primary education programmes to hold onto its consolidated votebank.

Pradesh Congress Committee president Niranjan Patnaik, who is also a former industry minister and whose family members have links with mining businesses, has advised chief minister Naveen Patnaik to keep 70 per cent of mines in the state under its administrative control instead of leasing them out to private firms.

“If the state government does not bring the majority of mines under its control, future of the state will be dark because it will act as an impediment in attracting large-scale industries to the province. “If CM Naveen Patnaik wants more steel plants to be set up in Odisha, he should ideally ensure that 70 per cent mines are under the control of state government,” said the OPCC chief.

Citing that the Odisha received the highest revenue from mines, the veteran Congress leader suggested setting up of another state-owned corporation like Odisha Mining Corporation (OMC) to ensure its better functioning.