In Srinagar, J&K’s DGP said the situation in the Union Territory is much better than before as the graph of militancy continues to come down 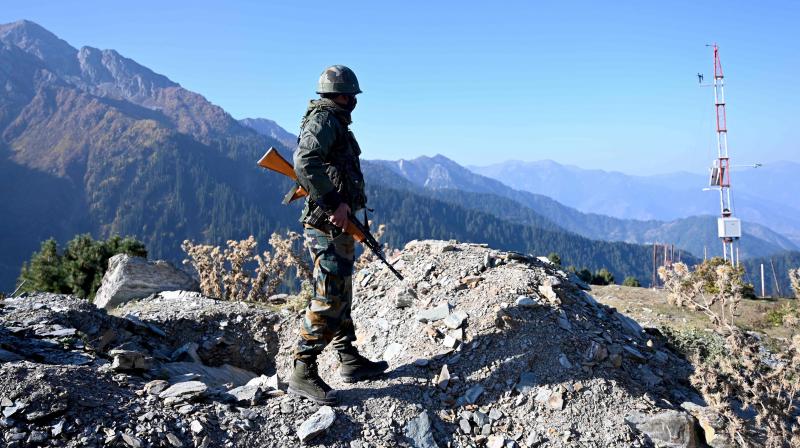 J&K’s DGP has said that the counter-infiltration grid was made stronger which has resulted in almost zero infiltration along the borders, but Pakistan’s “conspiracies” have not stopped yet. (AFP)

“Small, young boys, who are not yet mature enough to differentiate between right and wrong are being radicalised one way or the other and are involved in the new form of hybrid terrorism,” he said.

Northern Army commander, Lieutenant General Upendra Dwivedi, while speaking to reporters in Keran area in frontier Kupwara district said, “The security grid has been strengthened further to stop cross-border infiltration and to eliminate terrorists to supplement the efforts aimed at bringing about lasting peace in J&K and make it prosperous. But infiltration along the J&K’s border can’t be stopped completely.”
He said, “As I said that a 100 per cent stoppage of infiltration can’t happen but if a terrorist or group of terrorists succeed in sneaking in anywhere, they are quickly tracked and then eliminated. That’s becoming possible because a multi-layered security grid is in place”.
Lt. Gen. Dwivedi said that because of the renewal of the ceasefire along the borders with Pakistan in February last year an atmosphere of law and order has been established in the border areas while as common people have been relieved greatly. He said that there has been an effort by the Indian Army to see the truce agreement lasts forever.

He asserted, “Pakistan has now realized that violating the ceasefire agreement will not benefit it at all that's why they are maintaining it".
Asked about promotion of tourism in the areas falling close to the LoC, the Army commander said, "We have to give these areas a bloom and progress because these are rich in natural beauty and have much tourism potential.” He added, “We will bring areas like Karen on the tourism map so that people will come here from far and wide.”

In Srinagar, J&K’s DGP said the situation in the Union Territory is much better than before as the graph of militancy continues to come down. He, however, also said that terror launchpads across the LoC were intact and there was a huge pressure to push militants into the Valley.

“The situation in J&K is much better. The atmosphere is much better than before and I want to give its credit to the people and express my gratitude to them as they have helped the security forces and the administration with a great understanding,” he said while speaking to reporters on the sidelines of an official function here on Sunday.

He said, “Today, children are going to their schools without any fear, employees are attending their duties without any fear, the traders are doing their businesses without any fear. Daily life is going on normally”. He added, “There is no obstruction in any way today and everyone, people, security forces, are working together for that. So, the security situation is much better and we will make it more comfortable.”

The DGP added, “Now, since it has become difficult to come via the ground, they are using drones to transport weapons as the neighbour continues its sinister designs.” He said that the drone activity in the border area has become a challenge for the security forces “but we are fighting it very well”.

He reiterated that many modules involved in it were busted in the last two years and most of the weapons and narcotics dropped in J&K by drones were seized. “We will take stronger action on it and will overcome this challenge too”, Singh said.